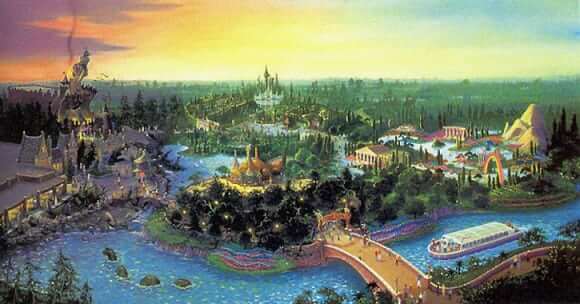 The Walt Disney Company is a shining example of creative energy. With a drive to continuously evolve and develop groundbreaking, entertaining experiences, the company is constantly coming up with new concepts. Not all of them come to fruition. Either for financial reasons or just a better, improved idea takes over, some of these exciting ideas have never seen a single guest.  Gathered below are few personal favorites that would have been really cool to see come into play. . . In 1975 Tom Baker (the 4th and perhaps most popular Doctor of the “original” series) introduced a series of Disney cartoons and clips for an August episode of the BBC series Disney Time. We can’t say for certain, but this might have been the inspiration for Michael Eisner’s desire to land the Doctor Who franchise in Tomorrowland.

According to Disney historian Jim Korkis, the plan was to have guests enter the show building through the T.A.R.D.I.S. (completing the illusion that it is indeed bigger on the inside) and whisk them off on an adventure in time and space. Of course, the emergence of Star Wars and an agreement with George Lucas came along and Star Tours was born instead (see the full ITM story here). Of note: BBC does plan to build a theme park in Kent which will include the Doctor Who and Sherlock franchises (full ITM story here). At the 2014 Destination-D event at Walt Disney World’s Contemporary Resort, Disney Legend Tony Baxter detailed land of Victorian splendor that never happened. Discovery Bay was to be the base of legendary explorer Jason Chandler and originally conceived back in 1976. Set in the 1870’s and nestled on the California coastline, this was a haven for inventors and feature several Steampunk style adventures including a dining experience aboard the Nautilus, a Dinosaur filled river rapids ride, a time-traveling Carousel of Progress style ride featuring Pepper’s ghost effects, a roller coaster, and an “explosive” shooting gallery called the Fireworks factory.  All of this would be overshadowed by the docked presence of the massive airship known as the Hyperion (from Journey to the Center of the Earth). Elements of this lost land were folded into other attractions and areas (like Disney Sea and Tomorrowland in Disneyland Paris); one ride concept, “Professor Marvel’s Gallery”, eventually became the Journey into Imagination at EPCOT Center.

See the full details of this marvelous masterpiece of imagination in our ITM story here. One of the more interesting aspects originally planned for Disney’s Animal Kingdom was the Beastly Kingdom area of the park (now home to the emerging land of Pandora based on the film Avatar).  This realm of mythological creatures would have seen Dragon Tower (which eventually became Dueling Dragons at Universal Orlando Resort’s Islands of Adventure), an outdoor maze called the Quest for the Unicorn and Fantasia Gardens, which was to be an attraction focusing on the various creatures from the Fantasia films (not to be confused with the existing mini-golf attraction at Walt Disney World).

Hints of the Beastly Kingdom can still be seen in the park’s logo as the outline of a dragon is alongside other animals of the park (this is also seen on many of the park’s benches) and the presence of a large dragon’s head adorned the park’s entrance near will call. The Unicorn section of the parking lot is also a reference to the land that was never built.

Museum of the Weird

Most know the history of the iconic Haunted Mansion that serves as a retirement home for ghosts. This classic ride through the halls of this haunted manor, aboard black Doom Buggy, was almost not a ride at all. During the development of the attraction, it was considered for a walkthrough-style environment featuring artifacts gathered in a Museum of the Weird. The tour would be part dining experience and part tour of the arcane artifacts (like talking chairs and haunted clocks). The restaurant and museum elements gave way to the classic ride we have today. Museum of the Weird did finally make an appearance – in the form of a mini-series of comic books by the Disney-owned Marvel comics. Originally announced in late 1993, this Virginia-based theme park would be located next to the Manassas battlefield.  An American history-themed, smaller park, would be a trip through major events in the nation’s past. Planned attractions included a Civil War fort with battle reenactments taking place nearby; a WWII airfield with planes and hangars (featuring a ride that would eventually become Soarin’).  Opposition to the park’s location by locals and protests eventually led Disney to drop plans for the park less than a year later.

What planned “abandoned” Disney attractions would you like to have seen completed?  Comment below; and remember Disney never truly throw away an idea – so don’t be surprised to see some of these concepts appear in one form or another in the future.