The presentation was one of the event’s best highlights, detailing a proposed expansion to Disneyland in 1979 but never built. Discovery Bay’s rich theming can, however, be seen around the world today.

D23 fans saw and heard new and exhaustive materials for the Steampunk type land, including a potential mini-series called the Discovery Bay Chronicles, narrated by and starring Peter Renaday (who was also Captain Nemo’s voice) in the Florida submarine attraction) as tycoon and founder Jason Chandler. Restored 35mm footage of the pilot episode revealed that Discovery Bay, formed as a heaven for inventors on the California coast in the 1870s, would be home to a massive airship, the Hyperion (of The Island at the Top of the World fame), as well as a base to seek and salvage the long lost infamous submarine known as the Nautilus. This series was imagined to serve as the means to convey (and advertise) the story of the new land, much the same way that Disney’s Wonderful World of Color was a companion to Disneyland. 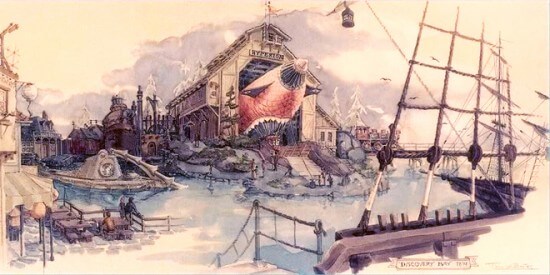 Tony recalled his work in turning the plain green ‘plastic boats’ of WDW’s 20,000 Leagues Under the Sea underwater attraction into the aged masterpieces that became the ride’s centerpiece. After 9 months of work transforming Harper Goff’s famous submarine into Fantasyland’s E-ticket fleet, his next task was Big Thunder Mountain. The mining mountain’s theme of gold-digging caused Baxter to wonder how all that treasure would be spent. 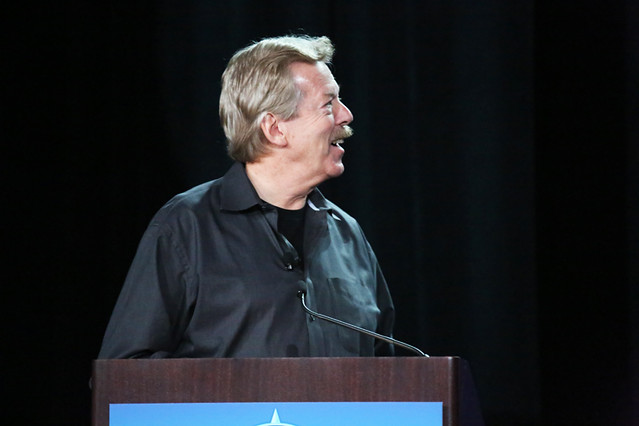 Working with Goff on the concept of Discovery Bay, several concept drawings were created. Restored versions of those drawings were shared with the audience. A 1/20 scale model of the land was built and even displayed for a time at Disneyland. As an element to Disneyland nestled between Thunder Mountain and Fantasyland (and at one time considered for an entirely new theme park), Discovery Bay would have been an amazing addition to Victorian-era excitement set a San Francisco of the late 1800s style town.

The sailing ship Columbia’s port would serve as the gateway to the land; several thrilling attractions were dreamed up for this impressive installation. An Arctic flight aboard the Hyperion (conceived as a senior year college project by Baxter) – a Pirates of the Caribbean style journey into a lost civilization at the top of the world – would become the centerpiece of Discovery Bay.

• The Aurora Borealis becomes a guide to find the Polar Ice Cap as the ride departs; next turbulent storms cause the dirigible to lower altitude –showcasing polar bears and migratory whales, which are followed into a delicate ice labyrinth – where the wales attack; attempting to escape the Hyperion crashes through the ice and into the lost island of Astrigard, with mystical creatures and culminating into a violent Arctic storm finale and quick journey back to Discovery Bay. A scripted narration was then aired to the delight of D23 Guests (Voiced by Pete Ready).

• A time travel concept using Pepper’s ghost sets in a Carousel of Progress style attraction where Guests would look out a window as the vignettes would payout.

• A dining experience aboard the Nautilus

• Professor Marvel’s Gallery (which would become Journey into Imagination); a traveling illusion show (a dozen small sideshows in a tiny version of the Carousel of Progress style ride)

• An explosive take on a shooting gallery where Guests aim live fireworks on conveyor belts, causing them to explode in “The Fireworks Factory.”

As Disney officials saw the potential plans, they wanted more and additional elements were added to the concept to bring an entirely new theme park to Disneyland – an age of invention area, botanical gardens, and even areas outside the berm, accessed by way of the subway. 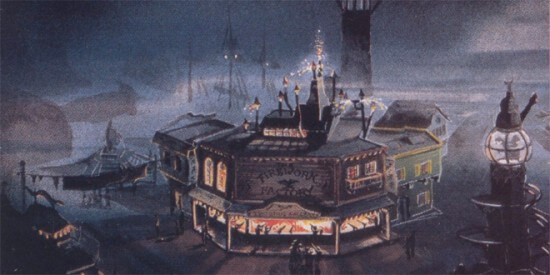 Sadly, the movie upon which most of Discovery Bay was based (The Island at the Top of the World) underperformed and left the impression that entertainment was not what the public wanted.

• Much of this Victorian Verne-esque view of the future found footing in Paris as Discoveryland, featuring the Hyperion peeking from the entrance to Videopolis and a walk-through journey through Nemo’s Nautilus in “Les Mysteries Du Nautilus.”

• The new theme park version became Tokyo DisneySea in Japan, not before being considered a potential park in Long Beach when Disney was involved with the Queen Mary.

• Professor Marvel’s Gallery morphed into EPCOT’s Journey into Imagination – of note; Figment was originally going to be green until Kodak (the attraction’s sponsor at the time) felt the color was too similar to Fuji Film’s famous green boxes (a competitor film company). The inquisitive dragon underwent a purple pigment make-over.

• Fireworks factory traded the shooting gallery guns for barbecue sauce and became one of the original restaurants of Pleasure Island.

According to Baxter, the area in which Discovery Land was set to emerge is pretty much as it was when the new land was first conceived – a concept that he is still ready to shepherd into reality.