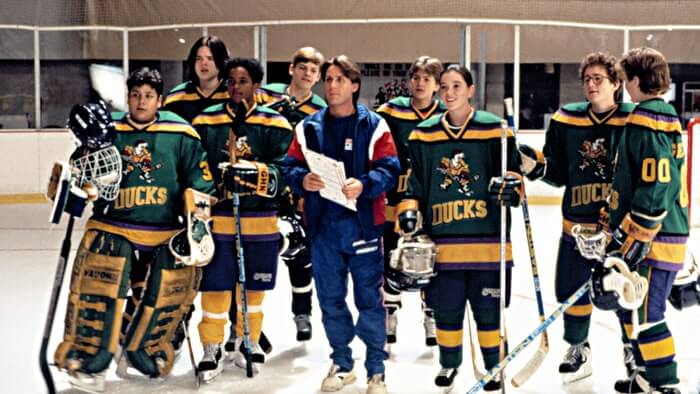 Like a Zamboni on the ice, The Mighty Ducks resurfaced this year with a new Disney+ television show.

Back in 1992, The Mighty Ducks enthralled Disney fans with its group of smart-mouthed kids and their less-than-enthusiastic hockey coach Gordon Bombay going from underdogs to champions.

Now, it seems Coach Bombay – played by Emilio Estevez – will not be returning for season 2 of the popular streaming series.

The brand-new Disney+ show The Mighty Ducks: Game Changers premiered on Disney+ on March 26, 2021. The new series had Disney fans excited with the return of Estevez who reprised his role as Gordon Bombay, starring alongside Lauren Graham (Gilmore Girls) as Alex Morrow and Brady Noon as Evan Morrow.

A second season was confirmed back in August, with production set to begin in early 2022.

According to Deadline, however, The Mighty Ducks franchise will continue without its famous coach Gordon Bombay. Emilio Estevez will hang up his skates and not be back for the Disney+ series’ upcoming second season.

It seems there has been some dispute between Disney and Estevez over the production’s vaccine requirements:

Disney Television Studios’ ABC Signature, which produces the hockey-themed sequel series, made the decision not to pick up Estevez’s option for Season 2 after weeks of back and forth with his team over the show’s Covid vaccination requirement. Reps for the studio and Estevez declined comment.

Heading into Season 2, The Mighty Ducks: Game Changers, like many Disney television series, has adopted a mandatory vaccination policy:

[The policy is] for the cast and crew in Zone A, which was included as an option in the most recent Return-to-Work agreement between the Hollywood studios and major unions. (Zone A includes all actors and crew members who come into direct contact with them.)

According to Deadline, Estevez, through his reps, has “declined to provide assurances that he would comply with the policy”.

With filming planned soon and scripts being written, Disney made the decision to continue the show without the character of Coach Bombay. It seems Lauren Graham will return for season 2.

Meanwhile, sources close to Estevez indicate that creative differences may have played a role in his exit.

While not a blanket policy yet, the Zone A vaccination mandate has emerged as an industry standard, with its adoption footprint steadily expanding. Netflix has made Zone A vaccines mandatory on all productions in the U.S. Disney TV Studios has introduced the policy on new series going forward as well as a number of existing ones, including The Mighty Ducks: Game Changers.

Though fans will be disappointed to hear the news of Bombay’s departure, we’ll have to wait and see if Emilio Estevez could still make a surprise guest appearance later in the season.

The classic 1992 The Mighty Ducks movie was so successful that two more films came out following the original. D2: The Mighty Ducks came out in 1994 and D3: The Mighty Ducks premiered in 1996 to round out the trilogy. Estevez starred in all three films, alongside Vincent LaRusso (Dollhouse) and Elden Henson (The Hunger Games: Mockingjay) as Fulton Reed.

Fans of both the original trilogy and the new Mighty Ducks: Game Changers were treated to a special surprise when they watched Episode 6, “The Spirit of the Ducks.” Members of the original Mighty Ducks team from the ’90s — Adam Banks, Kenny Wu, Fulton Reed, Les Averman, Guy Germaine, and Connie Moreau — all showed up to give support and advice to the new bunch of misfits.

The official description for The Mighty Ducks: Game Changers reads:

In present day Minnesota, the Mighty Ducks have evolved from scrappy underdogs to an ultra-competitive, powerhouse youth hockey team. After 12-year-old Evan Morrow is unceremoniously cut from the Ducks, he and his mom, Alex, set out to build their own team of misfits to challenge the cutthroat, win-at-all-costs culture of youth sports today.

With the help of Gordon Bombay, they rediscover the joys of playing just for the love of the game.

What do you about Coach Bombay not returning for season 2? Let us know in the comments.