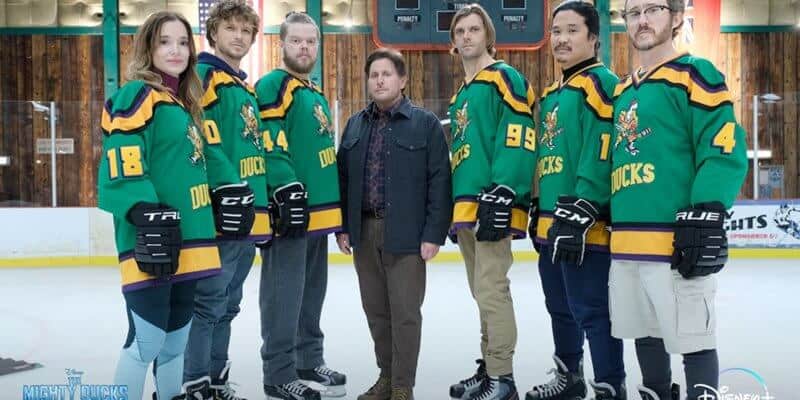 When The Mighty Ducks premiered in 1992, it was an immediate fan favorite. People loved watching a group of sassy, smart-mouthed kids deal with their less-than-enthusiastic hockey coach Gordon Bombay — played by Emilio Estevez — and go from underdogs to champions.

The Mighty Ducks is summarized on Disney+:

Trial lawyer Gordon Bombay (Emilio Estevez) never loses. But when he’s slapped with a community service assignment, he must coach a ragtag team of pee wee hockey players who can’t skate, can’t score and can’t win. Reluctantly, Bombay takes on the assignment and soon realizes there are more important things than winning. Armed with this new attitude, feathers fly as Bombay and the Ducks battle along to the toughest game of their lives.

The 1992 film was so successful that two more films came out following the original. D2: The Mighty Ducks came out in 1994 and D3: The Mighty Ducks premiered in 1996 to round out the trilogy. Estevez starred in all three films, alongside Vincent LaRusso (Dollhouse) and Elden Henson (The Hunger Games: Mockingjay) as Fulton Reed.

Recently, LaRusso and Henson reunited with other stars of the original The Mighty Ducks trilogy for the new Disney+ show The Mighty Ducks: Game Changers, which premiered on Disney+ on March 26, 2021. The new series stars Estevez, who reprises his role as Gordon Bombay, and Lauren Graham (Gilmore Girls) as Alex Morrow.

An official description for The Mighty Ducks: Game Changers says:

In present day Minnesota, the Mighty Ducks have evolved from scrappy underdogs to an ultra-competitive, powerhouse youth hockey team. After 12-year-old Evan Morrow is unceremoniously cut from the Ducks, he and his mom, Alex, set out to build their own team of misfits to challenge the cutthroat, win-at-all-costs culture of youth sports today. With the help of Gordon Bombay, they rediscover the joys of playing just for the love of the game.

Fans of both the original trilogy and the new Mighty Ducks: Game Changers were treated to a special surprise when they watched Episode 6, “The Spirit of the Ducks.” Members of the original Mighty Ducks team from the ’90s — Adam Banks, Kenny Wu, Fulton Reed, Les Averman, Guy Germaine, and Connie Moreau — all showed up to give support and advice to the new bunch of misfits.

Recently, Garette Ratliff Henson (Guy Germaine), Justin Wong (Kenny Wu), and Vincent LaRusso (Adam Banks) sat down with ComicBook.com to discuss what it felt like to reunite with their former team members.

Garette Ratliff Henson shared during the interview what it felt like to be back, saying:

“Yeah, it was really surreal. I feel like getting to do it, reading the script, getting out to Vancouver, all of that was exciting. But I think for me, the real moment that felt really unforgettable was when I put on that Ducks Jersey for the first time,” Ratliff Henson told us in an interview. “I remember, in the trailer, and we had the hockey gear on and I remember putting that on and just catching my own reflection in the mirror, and seeing that emblem and just thinking, ‘I cannot believe that I’m wearing this jersey again.’ It just felt so profound and really beautiful. It made me really grateful for the whole experience: being out there again and being in those movies as a kid.”

What made filming the series different for the Ducks this time around was the fact that it was being filmed in the middle of the COVID-19 pandemic. However, it seems to have one enhanced the experience of being back in a Ducks uniform for the first time in over two decades.

“That’s what was what actually made it really cool. Because, I think, without COVID, there’s a silver lining there. Because without COVID, we would have probably flown out for three days, and shot real quick and got back on a plane…But the fact that we got one up there and we had the quarantine for two weeks, and then we did have this space week. And so it was a lot of time together again, but like Garette’s saying, it was just enjoyable from the jump. We didn’t miss a beat.”

While filming may have been different from anything they have ever experienced, it is great to see that production was able to take place in a safe environment and fans are now able to feel some serious ‘90s nostalgia!

Do you love The Mighty Ducks: Game Changers as much as the original trilogy? Let us know in the comments!