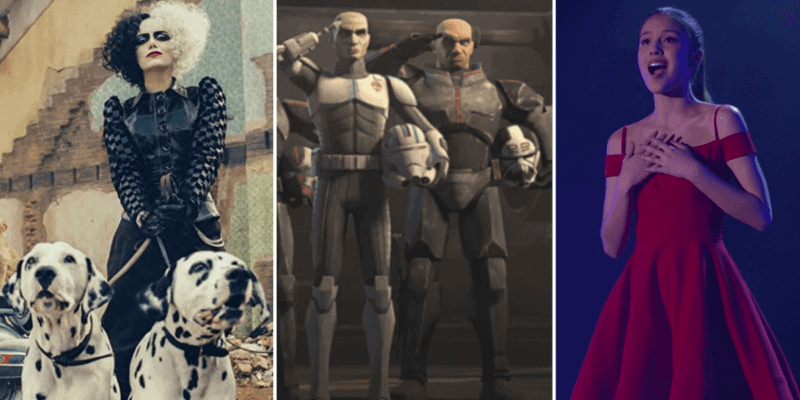 It’s hard to believe Disney+ isn’t even two years old. With its behemoth collection of Disney content, the streaming service is currently one of the most popular media operations in the world.

There is a lot on there, from Walt Disney Animated Classics to the Lucasfilm library, Disney Channel favorites to (most of) the Marvel Cinematic Universe. The streaming giant is also the home to smash hit original television shows, WandaVision, The Falcon and the Winter Soldier, and The Mandalorian.

With new announcements happening almost weekly, like Emma Stone’s Cruella (2021) launching simultaneously in theaters and on Disney+, and the Obi-Wan Kenobi show revealing its full cast, it’s sometimes hard to keep up with this ever-growing collection of films, television shows, documentaries, and shorts.

Here’s some of what’s coming up in May. This list isn’t exhaustive but will continue to be updated as and when new things are announced for the month.

Here is what is coming to Disney+ in May, courtesy of What’s On Disney Plus.

“The series follows the elite and experimental clones of the Bad Batch (first introduced in The Clone Wars) as they find their way in a rapidly changing galaxy in the immediate aftermath of the Clone War. Members of Bad Batch — a unique squad of clones who vary genetically from their brothers in the Clone Army — each possess a singular exceptional skill, which makes them extraordinarily effective soldiers and a formidable crew. In the post-Clone War era, they will take on daring mercenary missions as they struggle to stay afloat and find new purpose.”

“After failing to make the cut to join the now powerhouse Mighty Ducks junior hockey team, 12-year-old Evan’s mother encourages him to form a new team of underdogs with help from Gordon Bombay, the Ducks’ original coach.”

“A temperamental college basketball coach who gets fired from his job and must take a teaching and coaching job at an elite all-girls private high school.”

“The students from the school where the High School Musical films were shot stage a musical production based on the franchise.”

Tinkerbell and the Legend of the NeverBeast

“When the compassionate animal-fairy, Fawn, befriends the sleepy furry giant called the NeverBeast, persuading Queen Clarion and the vigilant Scout Fairies of its kindness is easier said than done. Is the peaceful Pixie Hollow in danger?”

“Before she becomes Cruella de Vil?

Teenaged Estella has a dream. She wishes to become a fashion designer, having been gifted with talent, innovation, and ambition all in equal measures. But life seems intent on making sure her dreams never come true. Having wound up penniless and orphaned in London at twelve, four years later Estella runs wild through the city streets with her best friends and partners-in-(petty)-crime, Horace and Jasper, two amateur thieves. When a chance encounter vaults Estella into the world of the young rich and famous, however, she begins to question the existence she’s built for herself in London and wonders whether she might, indeed, be destined for more after all. When an up-and-coming rockstar commissions Estella to design him a signature piece, she begins to feel as though she has truly arrived. But what is the cost of keeping up with the fast crowd– and is it a price Estella is willing to pay?”

May brings big new releases such as Cruella, Star Wars: The Bad Batch (premiering on Star Wars Day!), and the new season of High School Musical: The Musical: The Series, as well as continuing some fan favorites. Mark your calendars!

What are you excited to watch on Disney+ this May? Let us know!

Comments Off on Everything Coming to Disney+ in May