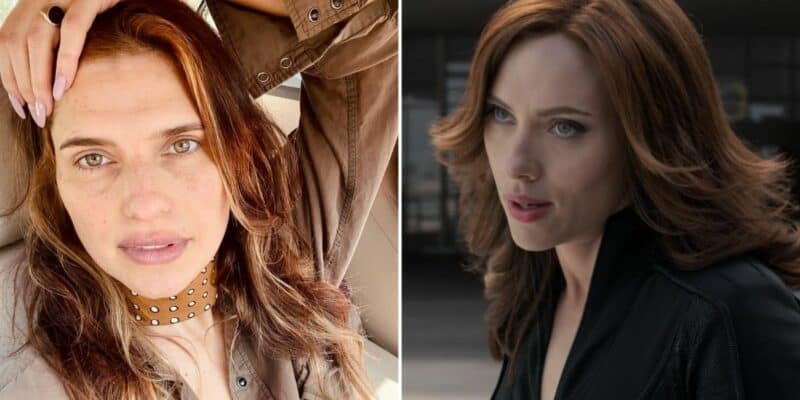 Earlier this year, the Marvel Cinematic Universe gained its first animated television series, What If…?. The show brought many popular characters like the late Chadwick Boseman’s T’Challa, Sebastian Stan’s Bucky Barnes AKA Winter Soldier, and the Avenger Iron Man to the small-screen on the Disney+ show.

One notable thing that the MCU series did was recast certain roles with new performers, one of which was Scarlett Johansson’s Natasha Romanoff/Black Widow, who was voiced by Lake Bell. Now, Bell has been spotted on the set of a big, blockbuster Marvel sequel debuting next year — could it be that this Multiverse version of Black Widow is moving to live-action?

What If…? debuted on Disney+ with much less universal fanfare than its predecessors — WandaVision, The Falcon and the Winter Soldier, and Loki. The Tom Hiddleston series broke Disney+ records and subsequently caused a shift for the streamer, with Disney now debuting all the new series on a Wednesday instead of Fridays.

As you can see, not all the talent from Marvel’s live-action movies made it into the What If…? Marvel universe roster. Characters like Peter Parker/Spider-Man (Tom Holland), Drax the Destroyer (Dave Bautista), and Captain America, were voiced by MCU newcomers, Hudson Thames, Fred Tatasciore, and Keaton, respectively. See all the replacements here.

What If…? director Bryan Andrews alluded to scheduling issues being the reason some people didn’t return. Performers like Brie Larson were possibly filming sequels like Nia DaCosta’s The Marvels (2023), or even other Disney projects like the all-new Marvel experience for Disney Cruise Line. As for Holland, the actor is currently about to debut his third solo Spider-Man outing with Spider-Man: No Way Home (2021), and executive producer, Brad Winderbaum suggested his contract with Sony may have been the reason Thames replaced him in What If…?.

Back to Black Widow, and Bell was a big-name choice for the former Red Room assassin in the alternate reality series. Appearing in multiple episodes of the show, Black Widow eventually became part of the Guardians of the Multiverse alongside Captain Carter, Thor, Doctor Strange Supreme (Benedict Cumberbatch), Gamora (Cynthia McWilliams), Killmonger (Michael B. Jordan), and T’Challa/Star-Lord (Boseman), when Ultron (Ross Marquand) threatened to dominate every part of the Multiverse.

In new images via Instagram, we can see Bell on the set of Ryan Coogler’s Black Panther (2018) sequel, Black Panther: Wakanda Forever (2022).

Ok. So there are three new cast members, including one deep Marvel reference gender swapped, and a day player. I’ll let figure/guess who is who. Also, the last imagine is black and white to make it harder to guess who is dangling from the helicopter…

While it doesn’t state that this is the set of Black Panther: Wakanda Forever, a report from Cosmic Circus reveals the location, and on the right of the above image, a person looking remarkably like Bell can be seen. To further add to this rumor, the actress follows the Black Panther account on Instagram…

It isn’t at all confirmed that the actress is reprising her animated Black Widow role in live-action, but it is curious to see her on the set of this big blockbuster. Bell has many film and television credits including Boston Legal, Man Up (2015), and The Secret Life of Pets (2016), so if Marvel were to bring her in as a new Multiversal Black Widow it would be an interesting development for the ongoing legacy of the popular character and original Avenger.

Johansson debuted the character in the MCU in Iron Man 2 (2010) before going on to becoming a major player in the Captain America and Avengers franchises. The actress headlined her own movie this year with Cate Shortland’s Black Widow (2021). While it was momentous for this fan-favorite to finally get her own solo story spinoff, it was tarred by litigation involving Johansson and Disney.

As for What If…?, the animated series will be launching its Season 2 possibly as early as next year with more stories and more alternate universes coming to Marvel fans across the world.

Would you like to see Lake Bell as a new live-action Black Widow? Let us know in the comments below!