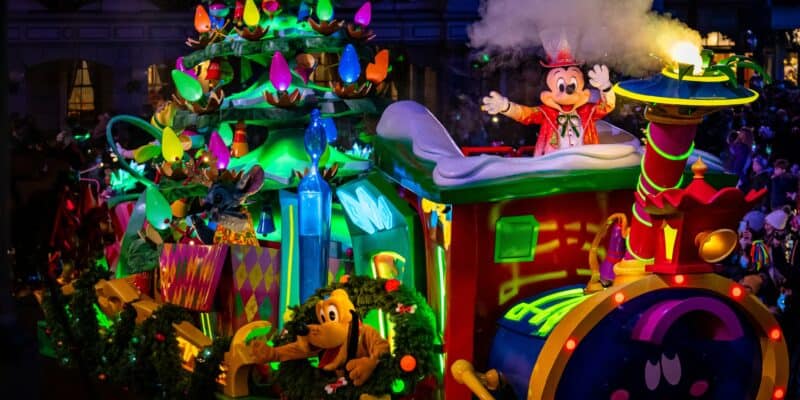 When Disney Parks around the world began reopening following their COVID-19 pandemic closures, Disney made a number of changes to keep Guests and Cast Members safe. This included social distancing measures, the installation of plexiglass and plastic sheeting on certain rides and attractions, and the suspension of some experiences, like parades and fireworks.

Now, however, many pandemic-related restrictions are being lifted and both parades and nighttime spectaculars have returned! Disneyland Paris, for instance, debuted a brand new holiday parade called Mickey’s Dazzling Christmas Parade at Disneyland Park.

Although the new parade, which is available during both daytime and nighttime, is gorgeous, it has experienced more than its fair share of problems since it debuted.

We recently reported on the audio issues Disneyland Paris officials were experiencing while trying to run Mickey’s Dazzling Christmas Parade, and it seems that the malfunctions still haven’t been corrected.

Mickey's Dazzling Christmas Parade malfunctioned again tonight with audio issues at the hub where the parade stopped and restarted a minute later without performing the showstop… pic.twitter.com/yyMlcKSlrC

At this time, it appears that the audio problems during Mickey’s Dazzling Christmas Parade have not been fully corrected, but the event is still magical and Guests are loving the stunning costumes, incredible floats, and Santa’s pyrotechnic wand that lights a spectacular Christmas tree!

The official description of this Disney Park holiday parade reads:

Whoop and wave at the new Mickey’s Dazzling Christmas Parade, the most merrily magical festive procession ever. During the day, Mickey & Friends, Disney Princesses and even Santa will be dancing to new music while gliding down Main Street, U.S.A. on fabulous floats – each one bedecked in its own twinkling Christmas tree design. While at night, they’ll illuminate the already spectacular holiday setting with an extra special sparkle.

Have you seen a Disney Parks Christmas parade yet this year?