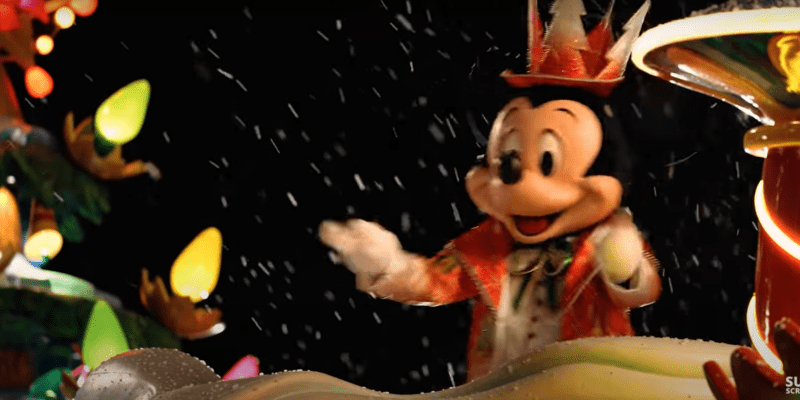 Christmas sweaters and hot cocoa at the ready – Disney have revealed the first look at a brand new Christmas parade coming to Disney Parks very soon!

Recently, we were so excited to announce the long-awaited return of parades back to the Parks, with Disneyland Paris confirming that a brand new holiday parade will launch on November 13, 2021.

This is only weeks away, and now we have a special preview of the magical Disney holiday parade, with an extra surprise.

The COVID-19 pandemic has significantly changed the Disney theme park experience, with regulations such as mandatory face masks for Guests age 2 and over and social distancing requirements altering the magical ambience expected in the Disney Parks across the globe.

Most significantly, experiences that created crowds, like parades and fireworks, were suspended across Walt Disney World, Disneyland Resort, Disneyland Paris, Shanghai Disneyland, Hong Kong Disneyland, and Tokyo Disneyland when each theme park resort first reopened and for some time after.

As COVID-19 cases look set to keep decreasing and vaccinations continue to be administered, Disneyland Paris is bringing back parades for its Guests this holiday season!

Disneyland Paris teams have secretly been developing “Mickey’s Dazzling Christmas Parade!” over the past several years and are now happy to present this brand-new parade that will put a sparkle in everyone’s eyes for Christmas!

The wonderful video brings us so much joy, with the European theme park giving us sneak peeks at the floats, characters and behind-the-scenes work behind the new Christmas parade.

The parade looks to include Mickey and Minnie Mouse in their Christmas finery, as well as Princesses such as Cinderella and Sleeping Beauty, Stitch, and Tinker Bell!

“The Holiday season returns to Disneyland Paris this year, and we’re super excited because we have a special gift, a brand new parade “Mickey’s Dazzling Christmas Parade”!”

Each float has its own Christmas tree, and showcases snow globes, lights, and of course Santa himself!

But the most exciting part? The parade is also a daytime show! Lenormand continues:

“This new Parade is full of surprises because there is a daytime version, and when the night comes, it transforms into another show with hundreds, thousands of lights that will illuminate the floats and tell another story.”

He explains that Mickey Mouse and Minnie Mouse have had 200 Cast Members working with them on bringing the Disney holiday parade to life since 2017, including technicians, performers, designers and choreographers.

See the special video below to feel all the feels as Disney Parks brings back more live entertainment!

A giant Christmas tree twinkles in a thousand colours in Town Square, while the twinkling fairy lights that line Main Street U.S.A. showing the way to Sleeping Beauty Castle. A Christmas card scene brought to life!

Are you excited to see the return of parades at Disney Parks? Let us know what you think should be brought back next!