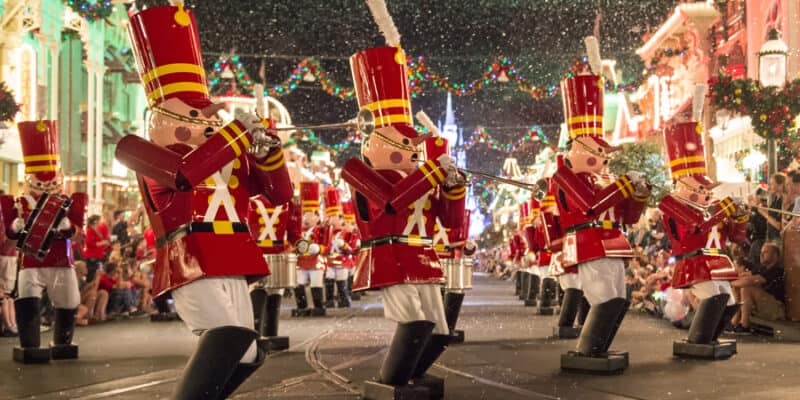 The holidays are fast approaching, and we can’t wait to get festive with Mickey and Minnie Mouse during Walt Disney World’s 50th anniversary celebration!

We’ve got our Christmas sweaters and Disney ears ready because Walt Disney World Resort has released its Park hours through December 28.

Guests with plans to visit The Most Magical Place on Earth this winter can plan ahead as Disney has released theme park hours for Magic Kingdom, EPCOT, Disney’s Animal Kingdom, and Disney’s Hollywood Studios for the month of December!

Below are the official theme park hours for Magic Kingdom from December 16 through 28.

Disney Very Merriest After Hours falls on December 16, 17, 19 and 21 and runs from 9 p.m. to 1 a.m., and will include the return of Christmas fireworks and the beloved Mickey’s Once Upon a Christmastime Parade.

The shopping and dining destination will be dazzling for the holiday season from 10 a.m. until 11 p.m. daily. Hours are extended to 11:30 p.m. on Fridays and Saturdays.

The holidays at Walt Disney World start this year on November 12 and will run through early January. The Parks will be decorated in their dazzling twinkling best for both the 50th anniversary celebration and the holidays!

All four theme parks will be decking the halls, including EPCOT, where the popular International Festival of the Holidays will take place starting November 26 and ending on December 30. The beloved Guest-favorite Candelight Processional will be returning this year after the pandemic, and narrators for this year’s performances have recently been revealed!

So there you have it! The Disney trip planning for the holidays can well and truly begin. Who is like me, and makes a spreadsheet to help plan the magic once the hours are revealed? Just me?

Let us know what you’re most excited about this holiday season at Walt Disney World!