‘Tis the season to be jolly — and we have some very magical news for this year’s holiday season. Disney has just announced some big names for this year’s narrators at the Candlelight Processional, returning to EPCOT in 2021!

After taking a break during the pandemic, Disney’s adored holiday tradition is returning to the America Gardens Theatre from November 26. Until December 30, Guests can once again enjoy Disney’s enchanting retelling of the Christmas story, as part of EPCOT’s International Festival of the Holidays.

This year’s Candlelight choir will be made up solely of Cast Members, without the addition of school and community choirs, and will require all musicians, narrators and singers to be fully vaccinated. 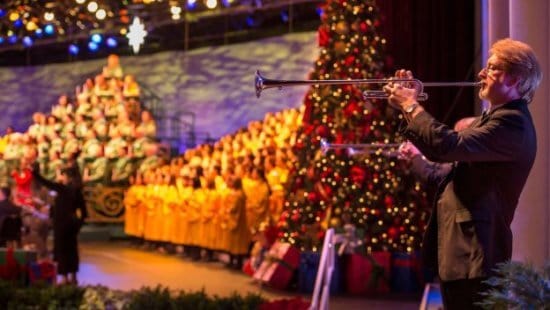 This year’s celebrity narrators will include

Disney Parks Blog also revealed that more names will be added over the next few weeks. Candlelight Processional Dining Packages are also returning and can be booked online beginning October 26.

Disney Parks Blog’s official announcement on Candlelight’s return is below:

“Candlelight Processional” will be back this year, Nov. 26 – Dec. 30, as part of the EPCOT International Festival of the Holidays presented by AdventHealth!

“Candlelight Processional” is a long-standing Disney Parks tradition, dating back to 1958 at Disneyland park. Walt Disney World guests have enjoyed the annual “Candlelight Processional” since 1971, initially at Magic Kingdom Park and since 1994 at EPCOT. After being greatly missed during last year’s holiday season, this magnificent production will once again grace the America Gardens Theatre with a live orchestra, cast choir, and celebrity narrator retelling the traditional Christmas story in spectacular and heartwarming fashion.

Disney also revealed that during EPCOT’s International Festival of the Holidays, holiday traditions of the world will come to life around World Showcase, such as:

So warm up your hot cocoa, don your best Christmas sweater, and look forward to this long-awaited Disney tradition’s return this holiday season!

Are you excited for Candlelight Processional’s return this year at EPCOT? Let us know in the comments!