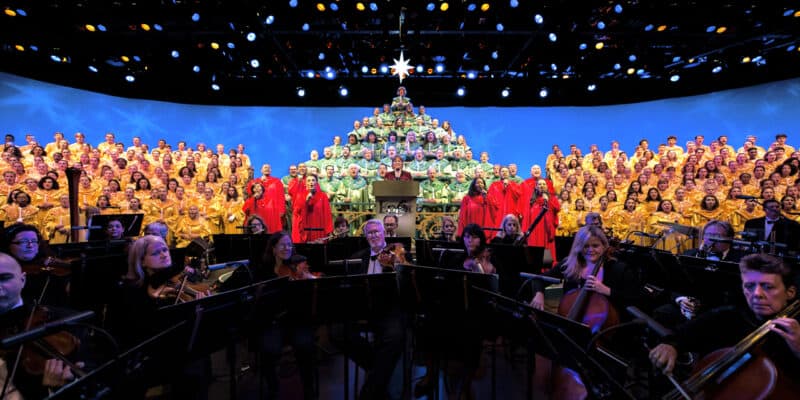 It’s the most wonderful time of the year — and we have some magical news and Christmas cheer to share! Disney has officially confirmed that the Candlelight Processional is officially returning to EPCOT this holiday season at Walt Disney World Resort.

Today, Disney shared that this holiday season, the Candlelight Processional will be hosted at EPCOT from Novemebr 26 through December 30 as part of the International Festival of Holidays. The celebrity narrators and dining package details for this special candlelight ceremony haven’t yet been revealed, but Disney says more information will be coming soon! In the past, celebrities like Neil Patrick Harris have been part of the event, so we’ll have to wait and see who Disney will invite this year.

Related: EPCOT International Festival of the Holidays Will Return For 2021

Below is the announcement from Disney Parks Blog:

…the “Candlelight Processional” will be back this year, Nov. 26 – Dec. 30, as part of the EPCOT International Festival of the Holidays presented by AdventHealth!

“Candlelight Processional” is a long-standing Disney Parks tradition, dating back to 1958 at Disneyland park. Walt Disney World guests have enjoyed the annual “Candlelight Processional” since 1971, initially at Magic Kingdom Park and since 1994 at EPCOT. After being greatly missed during last year’s holiday season, this magnificent production will once again grace the America Gardens Theatre with a live orchestra, cast choir, and celebrity narrator retelling the traditional Christmas story in spectacular and heartwarming fashion.

Since all these performers – including cast members, musicians, singers, and narrators – will be required to be fully vaccinated, this year we are not planning to host choirs from different community groups and schools. Instead, to maintain the grandeur of the performance, we are expanding our cast member choir to fill the stage with voices. We’re optimistic that the guest choirs will be able to rejoin us next year for this special holiday opportunity.

Due to the pandemic, it has been quite some time since fans have had the opportunity to see the procesisonal. But now, it is great news for both longtime fans and newcomers to get to see the Candlelight Processional at EPCOT this year!

In other magical news, you can save BIG on a holiday trip to Disney World this December. Click here for more information.

Stay tuned for more details as they are released, and click here to book your holiday trip to Walt Disney World!