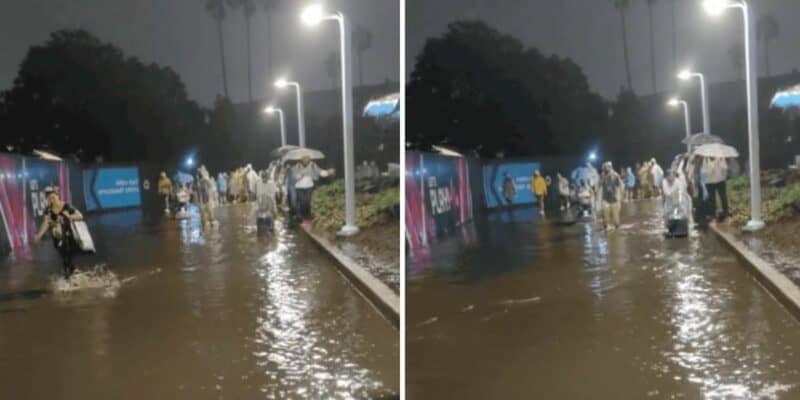 If you are planning a trip to Walt Disney World Resort, you should prepare for not only the magic and blistering heat, but also the rain as well.

Central Florida can be a very wet place, and during the summer and early months of fall, there is rainfall almost every day. The rain does not typically last too long, but when it arrives, it often comes in the form of a torrential downpour, soaking everyone in its path. The rain will not bother you much if you are indoors, but if you are at Magic Kingdom, EPCOT, Disney’s Hollywood Studios, or Disney’s Animal Kingdom, some areas may feel like you are at Blizzard Beach.

One area in Magic Kingdom that I can say floods dramatically is Tomorrowland. The uneven surface area of the pavement allows the water to pool and collect much faster than any drain could remove it. The parking lot for the TTC has also left me wishing I brought a towel, even with an umbrella.

The issue with flooding at Disney World is that even if you have a poncho or umbrella, the flooding often targets your feel and ankle region. I always suggest a waterproof shoe when visiting the parks, or at least keep a pair in your backpack so that you do not have to endure the pain and uncomfortable feeling of trudging around in your soaking sneakers and soppy socks.

Recently, during a major downpour in Orlando, EPCOT became quite the pool. LoliGod17 took to Reddit to show off the below video where we can see Guests trudging through the flooding in Future World. Some Guests attempted to walk along the elevated curb, while others rolled their pants up. It is safe to say that no matter what you did, these Guests left EPCOT without a dry bone in their bodies.

So Epcot was a little flooded last night from WaltDisneyWorld

As we can see from signage, this is the pathway to the Park’s exit, which is unfortunate as each Guest who is heading back to the parking lot must pass through the lake that was created by the downfall.

Now, if you are planning a vacation soon, be aware that if it rains heavily while you are at EPCOT, you will be in the same predicament — so be sure to prepare with the proper footwear!

What other areas of Walt Disney World have you seen a flood in the past?