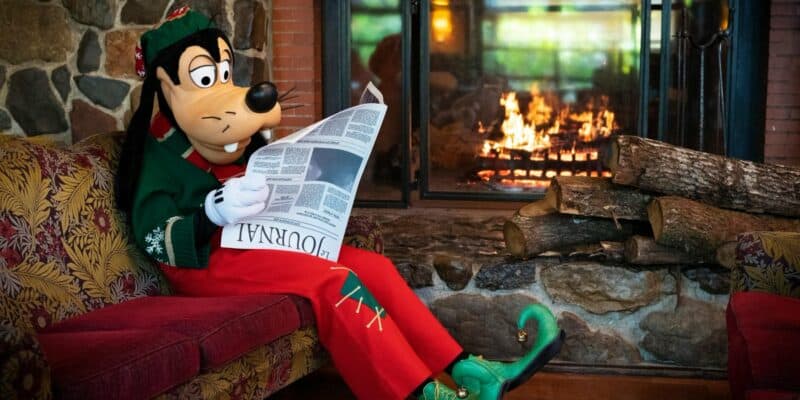 When Guests visit a Disney Park, most of the time, holidays inside Disney Parks tend to start a lot sooner than they do for the general public.

For example, on August 2, Magic Kingdom at Walt Disney World Resort was already decked out for Halloween with their Halloween event, Disney After Hours Boo Bash, beginning later that week. Considering many are still gripping onto the final days of summer and not wanting to even think about fall weather yet, you may be shocked to hear that Disney is already ready for the snow to hit the ground.

The Disneyland Paris (@DisneylandParis_EN) Twitter account recently Tweeted a photo of Goofy looking cozy by the fire in his Christmas attire with the caption:

Hilariously, Disneyland Paris (which encompasses both Disneyland Park and Walt Disney Srudios Park) has not even begun its Halloween celebrations! Disney’s Halloween Festival begins on October 1 and runs through to November 7. The event is described as:

Those dastardly Disney Villains have waited all year to spook us with their terrible tricks once again! They’ll be sneaking around Selfie Spots, while parents and little pumpkins alike can enjoy our terrifyingly fun attractions, devilishly delicious treats, and eye-popping surprises.

With the event running into November, it is likely that other Disney Parks such as Disney World will already be decked out for Christmas before the spooky decor is even removed from Disneyland Paris! Christmas will begin at Disneyland Paris on November 13 with their Disney Enchanted Christmas event. More details to come, but this is what we know so far:

Make Christmas more special than ever this year by celebrating at Disneyland Paris, the place where festive magic comes to life. From 13th November 2021 to 9th January 2022, the Parks will be sparkling as they are transformed into a picture-perfect Christmas card, while Disney Characters dressed in their finest seasonal outfits welcome you for magical merry moments.

At Walt Disney World Resort in Florida, Guests can celebrate the holidays with the Disney Very Merriest After Hours event. Disneyland Resort in California will also be celebrating the holidays this year, though those details habe not yet been released.

What do you think of Disney already pushing for the winter season before the fall has even begun?