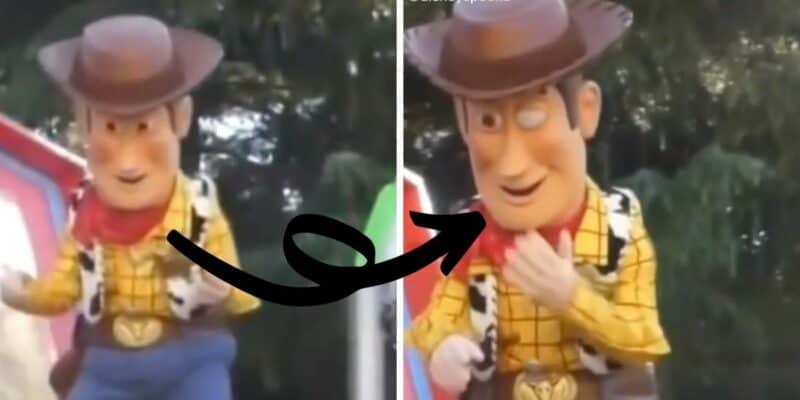 The Disney Parks are filled with magical experiences including character meet and greets and Disney parades. However, sometimes things do not go according to plan and mishaps happen — just like the time Woody from Disney/Pixar’s Toy Story lost his eye during a Disney Park parade.

Related: Man Left Behind as Magic Kingdom Proposal Does NOT Go as Planned

In a video posted to TikTok by user Disney Spooks, you can see that during a Disney Parks parade, as Woody passed by Guests waving, he suddenly looses his eye.

It looks as though Woody was playing some sort of “peek-a-boo” game with one of the Guests as he passed by on the parade float, but soon after rubbing his eyes, one of them turned ghost white — as if he completely lost his eye!

You can see the video below or by clicking here:

It is unclear as to exactly when this unfortunate mishap happened, or at which theme park it occurred at.

If you have never seen Toy Story, Disney/Pixar describes it as:

Ever wonder what toys do when people aren’t around? Toy Story answers that question with a fantastic fun-filled journey, viewed mostly through the eyes of two rival toys – Woody, the lanky, likable cowboy, and Buzz Lightyear, the fearless space ranger. Led by Woody, Andy’s toys live happily in his room until Andy’s birthday brings Buzz Lightyear onto the scene. Afraid of losing his place in Andy’s heart, Woody plots against Buzz.

But when circumstances separate Buzz and Woody from their owner, the comically-mismatched duo eventually learn to put aside their differences, and they find themselves on a hilarious adventure-filled mission where the only way they can survive is to form an uneasy alliance.

Do you want to visit the Disney Parks on your next vacation? If so, make sure you start planning today! Click here to get started.

Comments Off on VIDEO: Woody From ‘Toy Story’ Loses His Eye During Parade