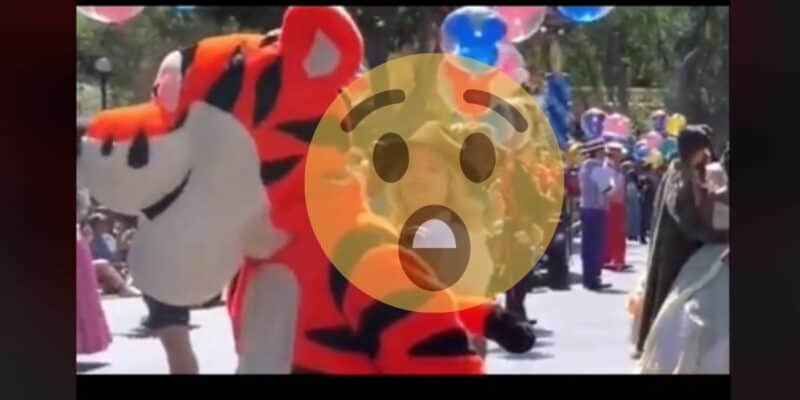 The Disney Parks are filled with magic that you won’t find anywhere else, but sometimes, things do not go according to plan, causing a bit of that Disney magic to be ruined.

A few years ago when Guests were visiting what looks to be like Disneyland Park, during an event, Guests and Cast Members noticed that Tigger’s costume had a bit of a fail and was not on properly.

A video from a few years ago shows Tigger’s costume malfunction at Disneyland and is now being shared to TikTok, causing a lot of conversation. Within the video, you can see that as the Disney characters were gathered around listening to the iconic Walt Disney Dedication Speech, which is from Disneyland’s opening day, Tigger’s costume had a bit of a malfunction.

When Tigger turns his head to face the opposite direction, Guests and Cast Members noticed that Tigger’s head was not attached correctly. If you look closely, you will see part of Tigger’s head sticking out from where it should be tucked into his body, which exposes the Cast Member’s neck and skin.

Related: Winnie the Pooh and Tigger Are Together Once Again!

Though the Cast Members noticed the mistake and were able to fix the costume within a matter of minutes, many Guests already noticed the fail and it, unfortunately, ruined the magic for some.

Do you want to visit the Disny Parks on your next vacation? If so, make sure you start planning today! Click here to get started.