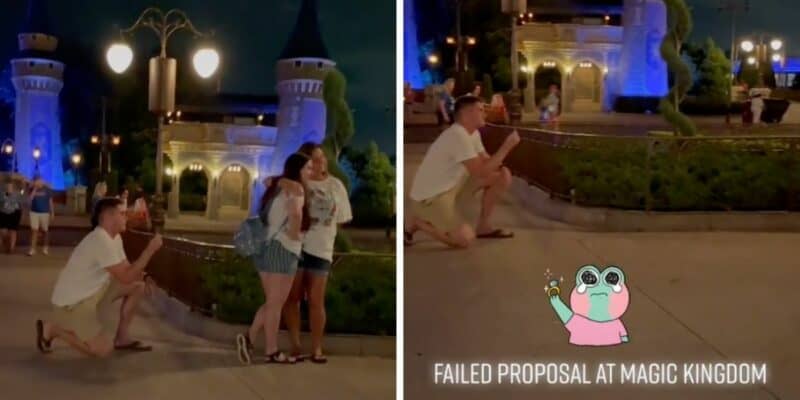 Both Images: Credit Screenshot via @chizko7

Walt Disney World — the Most Magical Place on Earth. Many families travel from all around the world to visit and experience the magic. Not only is it one of (if not the most) visited travel destinations, but fans come to the Parks to celebrate milestones, share big announcements, and of course, propose to their loved ones.

Well, one proposal, which was caught on video, did not go exactly as planned…

In a video posted to TikTok, which was posted last summer but is now making its rounds, we witness what we thought would be a magical moment of celebrations. However, things did not go according to plan.

One Disney World Guest got down on his knee behind his girlfriend and friend while they were taking a PhotoPass picture. After they finished posing, instead of turning around, the girls both walked away, leaving the man down on one knee, all by his lonesome.

From the looks of it, it seemed that he laughed it off when he got up and followed them down Main Street, U.S.A. We hope that he caught up with them and found the new perfect spot to propose to his girlfriend.

If you are thinking about having a magical Disney proposal, but aren’t sure of how to go about it, check out our guide here. It has all the tips and tricks so that you pull off the best Disney proposal and will make memories that last a lifetime.

Have you ever proposed or been proposed to at Disney World? Let us know your stories in the comments below.

If you want to have the ultimate Disney proposal, you need to book a vacation! Click here to get started today.