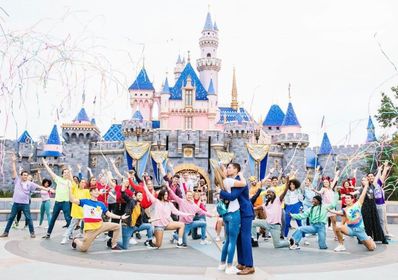 Disneyland is known to many as the happiest place on Earth! That’s why so many couples flock to Disneyland year after year for magical proposals.

I know I have seen my fair share of Disneyland proposals, and even gotten proposed to next to Sleeping Beauty’s Castle at Snow White’s Wishing Well — so, I’m pretty familiar with the concept. With that being said, I also know that there is a small margin for error as Disney Cast Members and Disneyland PhotoPass is there to help make sure things go according to plan.

I have never heard of a Disneyland proposal gone wrong, until now. Thanks to FoxNews, who shared a TikTok that has now gone viral, not all Disney proposals go quite according to plan. Gracie O’Neill recently shared her magical proposal on her TikTok account. The video did take place a few years ago, as Disneyland still remains closed due to the COVID pandemic. However, since Gracie has uploaded this video, it has now gained over 5 million views!

So, what exactly went wrong?

In her video, Gracie and her boyfriend are posing for a picture with the beautifully lit Sleeping Beauty Castle in the background. After the camera flash and some audible “awe’s”, O’Neill’s boyfriend gets on one knee to ask for her hand in marriage. Now this is where it takes a turn! Instead of a “yes”, Gracie proceeds to hit her boyfriend on the head!

Not to worry though, this odd fairytale has a happy ending! Turns out, Gracie didn’t think the proposal was real, because her boyfriend had been known to fake a proposal a few times before. So, because Gracie thought this was a joke, she smacked him on his head.

However, her boyfriend was serious this time! He presented a ring to her and you can clearly see Gracie’s shock, excitement, and what seems like a little bit of disbelief. Gracie captioned the video by stating, “seriously the happiest day of my life!!”. Watch how it all went down in the viral TikTok video below.

seriously the happiest day of my life!!

What do you think of this Disney proposal story? Let us know in the comments!

Comments Off on Happily Ever After? Disney Proposal Gone Wrong, Goes Viral