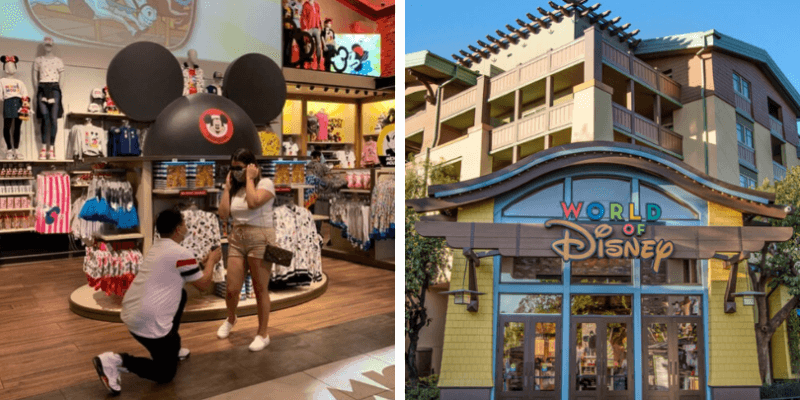 Disney fans are no stranger to seeing proposals at Disney Parks around the world.  Most significantly, you’ll see the romantic gesture of dropping to one knee in front of one of the Disney Park castles.  We’ve even seen a Disney movie proposal where a real-life prince charming hacked the movie screen!

But a World of Disney proposal at Downtown Disney, that’s a creative one we haven’t seen before.

A little over a week ago, a man named Christian Carrillo asked his girlfriend of five years to be his happily ever after, and now, she’s his fiancé!  This whole event wouldn’t have been possible without some sneaky help coming from the Cast Members, but they were more than excited to help make this magical moment happen for the couple.

We’re thinking Christian probably wanted to propose inside the parks, but didn’t want to wait any longer to ask his love to marry him.  Since we’re unsure of when the gates will open back up, this is actually a really sweet and special option for Disney lovers to be surrounded by what they love the most: Disney magic!

She said yes! ✨Christian Carrillo proposed to his girlfriend of five years, April Lopez, inside the World of Disney store on July 13. Behind this special moment was a team of cast members who embraced the opportunity to make some magic in a place more accustomed to seeing guests shopping for spirit jerseys than proposing on bended knee. #downtowndisney #downtowndisneydistrict #worldofdisney #disneyproposal #mickeymouse #castmember #disneylandresort #wecreatehappiness

A post shared by Disneyland Cast and Community (@disneylandcastandcommunity) on Jul 22, 2020 at 10:24am PDT

Disney proposals are just so romantic and someone here on the Inside the Magic team has even had a Disney proposal of her own at her favorite attraction, the Haunted Mansion.

For a complete gentleman’s guide to proposing at Walt Disney World, click here!  It’ll give you some great ideas that will fit your love story and get that yes at any of the Disney Parks.

You don’t have to be at the most Magical Place on Earth to ask the love of your life to marry you because you have options to propose at Walt Disney World outside of the parks at these locations.