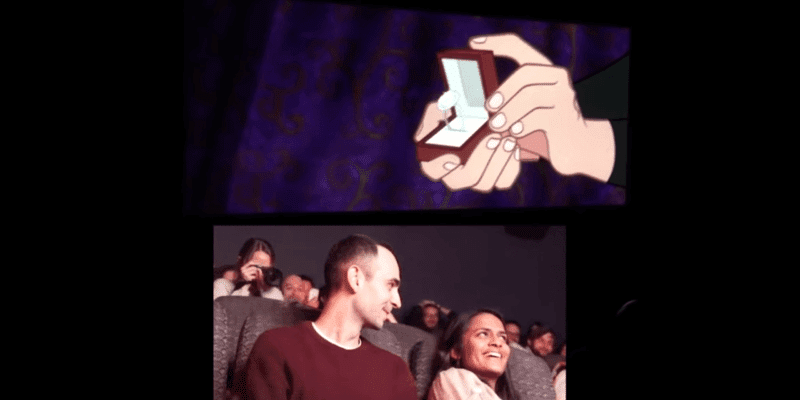 Sthuthi David just wanted one thing: a nice evening at the movies with her boyfriend to watch her favorite movie and Disney classic, Sleeping Beauty. Little did she know what her boyfriend, Lee Loechler, had something else in store for her.

While I, admittedly, set high expectations with my Gentleman’s Guide to Proposing at Disney World, our boy, Lee beats everything. AND HE DIDN’T EVEN SET FOOT IN A DISNEY PARK! This guy spent six months hacking and altering the iconic kiss scene in Sleeping Beauty—you know, the one where Phillip makes it to Aurora’s tower and kisses her and she wakes from her eternal sleep–to appear as if Sthuthi was Aurora and he was Prince Phillip.

But most people would expect the animation and the actual scenes to mimic each other, right? Wrong. Check this out:

Don’t believe me? Well, watch the whole proposal for yourself right here:

Of course, during the setup, the girl looks over at the guy with that face all girls make that says–in G-rated terms–“what are you doing? I know you’re behind this.” She knows something up. But she couldn’t be happier with the result. When she said yes, the movie cut to the ending. The entire theatre, whom Lee explains was in on it from the beginning, applauded the newly engaged couple. We hope they truly live happily ever after.

What do you think of this engagement? Do you think you could top it? Let us know in the comments!