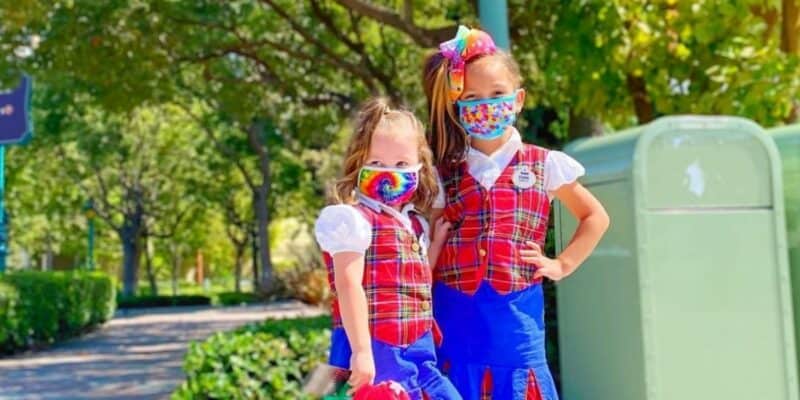 Credit: The McLeod Family on IG

The McLeod family loves Disney! Mom, Eeka, and three kiddos adore the Disney Parks and often visit the California Resort for food and fun. However, one visit this November ended in tears as Disneyland Security Cast Members confiscated parts of the children’s costumes (handmade costume name tags) they have been wearing to the Parks for years.

Eeka’s children, Evan and Ella, according to her posts, both have autism and love the Disneyland Cast Members. Frequently dressing in plaid vests with coordinating bottoms, Eeka’s 4 and 6-year-olds have worn the name tags she bought on Etsy a few years ago. Eeka has also seen other children wearing similar items with no problem, and can confirm that there is no rule against children wearing anything resembling a costume in the Dress Code.

However, after being let in the theme park, Eeka’s family was shortly surrounded by Disneyland security, who confiscated the name tags and threw them in the trash. The only other option given to the McLeod family was to leave the property, which was not possible as she was dropped off at the Resort by her babysitter.

While Disneyland later reached out from Guest Relations and confirmed this was not the policy for children, the damage had already been done. According to Disney Parks Dress Code and Costume Rules, children ages 13 and under are allowed to wear costumes any time of the year.

The entire post is both on Eeka’s TikTok and Instagram accounts for viewing. She expresses a hope that the video promotes awareness and encourages The Walt Disney Company to properly train their employees on how to respond to non-emergency situations uniformly. Her copy on her Instagram reads:

I’m still very upset about this entire situation. I still don’t know why this happened. A Guest Relations supervisor confirmed this is NOT a policy for children and stated she did not know why these security officers did this to us. As autistic individuals my kids process stressful experiences like this very differently than neurotypical individuals. Evan clearly tells the security individuals (all leads and supervisors) that he did not want them to throw their name tags away. Little memories we had had for years…Disneyland threw our memories away in garbage.

The full video is on our tiktok page. I was confused and in shock as this was happening. Not only was I made to surrender the name tags, but I had multiple security on me like those fake little tags were some sort of weapons. The Disney ears and buttons they give away have kids names on them. My kids have worn these costumes for years as do other children in the works.

My brain can’t wrap itself around this situation and idk if we will ever go back to Disneyland. It was always our safe place but our safe place is clearly no longer safe. And my kids who are both autistic (this effects every aspect of their lives) truly believed the Cast Members were their friends. Then they watched their “friends” confiscate (security’s words) the only name tags they have ever had and throw them away.

It is my sincerest hope that this video would promote awareness and encourage Disneyland to re-think how they train their employees to respond to situations that are in no way a danger. I hope no individual walking onto Disneyland property ever has to experience something like this.

There will always be love in our hearts for Disneyland. And this is by no means a representation of all their CM’s. Some of whom have been angels to my children. We love our Cast Member friends so much ❤️

The original video, posted by the McLeod family,  (handle of @themcleodfamily on Instagram) goes on to detail the situation that occurred on November 16, 2021. Naturally, commenters are shocked at how Disneyland Security mishandled the incident, and they have been speaking out with examples of how Disneyland Cast Members have not uniformly reacted to incidents in the theme parks and need more training.

Have you seen these Disneyland Cast Member name tags in the Parks? Leave us a comment below!