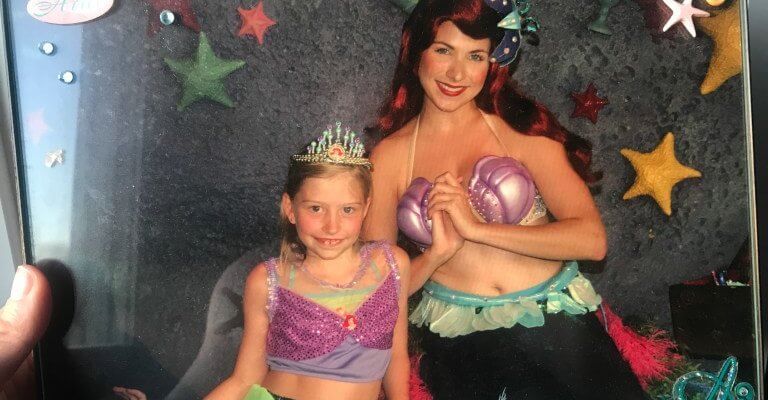 Disney Princesses have inspired young people everywhere to be the best version of themselves. However, it seems this young person took this inspiration an entirely different way and decided to spend over $3000 to transform herself into a real-life mermaid like Ariel of Disney’s “The Little Mermaid.”

Corrine Hinton, 22, first met the famous princess from under the sea (Ariel) in 2005 when she visited Walt Disney World at the age of seven. “I met Ariel when I was younger and that just sparked everything for me,” said Corrine to Metro. “It felt like I was meeting a celebrity and from then on I wanted to be just like that person.”

Hinton, from Easton in Pennsylvania, says this magical meeting is what began her “double life”–a life which Hinton created all by herself using only her imagination and the power of the internet.

When Hinton was 15, she came across a fabric maker in Clearwater, Florida, who specializes in making mermaid tails. Hinton says she “begged” her parents for a tail on her next birthday–a tail which cost $250.

After her parents purchased the tail for Hinton, she says she then spent hours in her local swimming pool learning to swim with the mono-fin mermaid tail, just like Ariel. “I like feeling mysterious and got obsessed very quickly,” said Hinton.

As Hinton’s passion for being a real-life mermaid began to grow, so did her spending on her aquatic hobby. “I started taking it much more seriously when I was 18 and I bought a silicone tail that cost $800,” said Hinton.

Hinton reveals that the hobby had started to “break the bank a little” so she began making her own tops. However, even with making some of her own additions to her costumes, Hinton has paid a premium to maintain her sea legs.

‘To date I’ve spent about $3,000 on costumes. My most expensive tail cost $1,000 on its own,” says Hinton. Currently, Hinton owns a total of three different mermaid tails.

Although, as much money as Hinton has put into the hobby, she has seen a return as the 22-year-old also poses as an actor for children’s birthday parties where she is able to make some cash.

“It all started when I was just practicing in a community pool and I got asked to perform at a party by a parent,” says Hinton. Hinton says when she goes to parties she typically will play water-based games with the kids or just swim around while the party goes on.

Hinton may only play an actress at these kids parties, but Hinton says she tries to give the kids more than just background entertainment with her appearances. “It all depends what the parents want but wherever I can I try to teach kids about the environment and why it is important,” says Hinton.

Hinton cares deeply for marine life and in her professional career would like to continue to work with her sea life friends. “My dream job is to work in an aquarium,” said Hinton.

If you want to see more of Hinton’s underwater fun as a mermaid, be sure to check out her Instagram page!