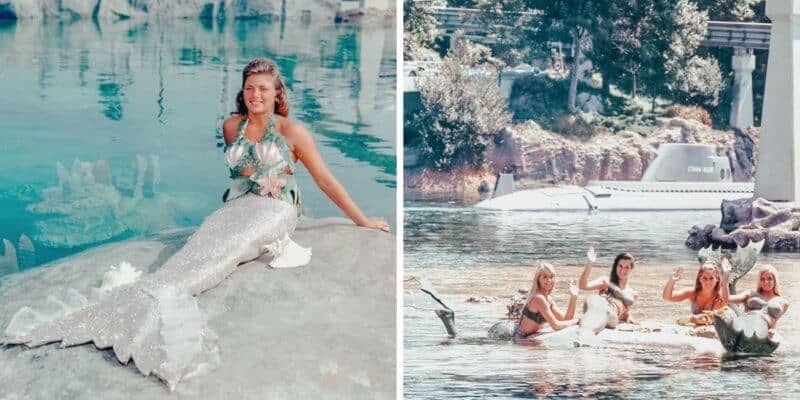 Back in 1959, just four years after Disneyland Park officially opened its gates to the public, the Submarine Voyage attraction debuted.

For those of you who don’t already know — The Submarine Voyage was a theme park attraction at Disneyland in Anaheim, California, in which was inspired by the actual submarine (the first nuclear-powered submarine titled the USS Nautilus) which ventured to the North Pole in 1958.

The attraction vehicles were designed to resemble real submarines, which allowed guests visiting the theme park to dive right below the surface of the water and take in the incredible views of the undersea life in the tropical lagoon. But those guests who were visiting Disneyland Park in 1959 were in for a special treat — live mermaids! (Well, sort of).

I think it’s safe to say that mermaids don’t actually exist, but Disney used to cast live mermaids who spent their days flippin’ their fins around the beautiful tropical lagoon. Whether you were enjoying the Submarine Voyage attraction or you were taking the monorail into Tomorrowland, guests were able to spot the beautiful mermaids enjoying the sun on a rock or splashin’ around in the water.

Huffington Post got the chance to speak with one of the mermaids, who mentioned why they spent so much time on the rocks. Suzanne Brewster, a former Disneyland mermaid, explained that the water in the mermaid lagoon was much colder than it looks so they typically sat on the rock to warm themselves up in the warm California sun.

The live mermaids only appeared in Tomorrowland during the summer of 1959 and three other seasons between 1965 and 1967. The Submarine Voyage attraction closed in 1998.

The Finding Nemo Submarine Voyage opened to guests in the Tomorrowland area of Disneyland Park in 2007, which is a re-imagined version of the original Disneyland attraction, featuring some of our favorite friends from the Disney Pixar film Finding Nemo.

If you want to learn more about the history of Disney Parks or see other vintage photos, check out our other articles here.

Do you remember when Disneyland used to have live mermaids in Tomorrowland? Let us know in the comments.