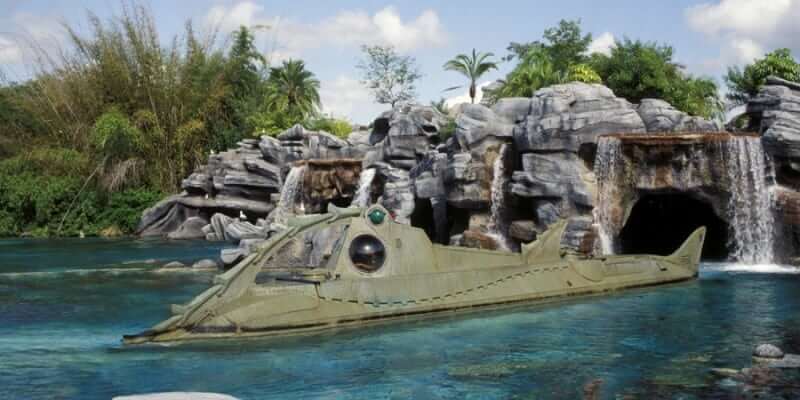 Based on the 1954 Disney movie of the same name, “20,000 Leagues under the Sea” was an extremely popular early attraction at Walt Disney World in Central Florida.  The centerpiece (and ride vehicle) of this undersea adventure was the “Nautilus,” a smaller version of the submarine Captain Nemo commanded in the Disney movie.

Related: At Home Imagineering: Custom “20,000 Leagues under the Sea” home theater is a Disney fan’s dream 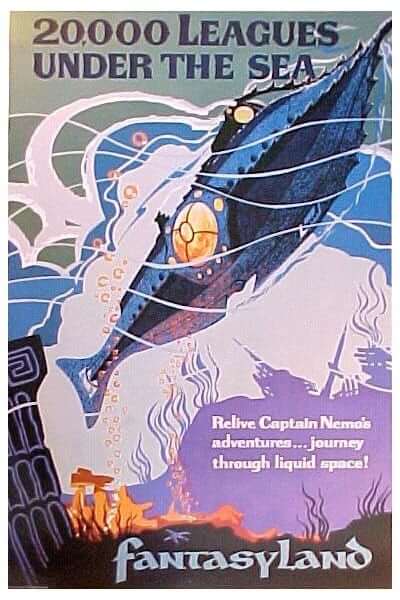 After a successful expansion of Disneyland (California) that included the “Submarine Voyage” attraction in 1959, it was decided that a version of the popular experience should be included in the forthcoming Walt Disney World in Florida.  The new undersea attraction would be based on the 1954 live-action Disney movie.

As guests boarded, folded down their seats, and prepared for departure, the sound of Captain Nemo’s voice (Pete Renaday) could be heard over the speakers. A steady stream of bubbles rising past portholes on the vessel indicated the sub made its departure dive.  During the journey, guests witnessed various sea creatures and even a team of divers harvesting kelp.  Deadly weather, shipwrecks, icebergs, mermaids, and giant sea serpents are all encountered along the way.   The adventure came to a climax as the “Nautilus” faced a giant squid (which appeared to have already destroyed another submarine).

A lavish lagoon and “underwater” show building were constructed for the experience.  Smaller versions of the infamous Harper Goff “Nautilus” submarine were constructed at Morgan Yachts on Florida’s west coast.  The project was overseen by Disney Legend Bob Gurr.  The 40-ton ride vehicles were transported across the state and installed into the rides guide track.  The task of transforming the pristine green vehicles to the appearance of sea-worn submarines was handled by Disney Legend Tony Baxter. Baxter also worked on show elements for the deep-sea part of the ride.

The ride vehicles themselves never actually dove below the water’s surface.  Instead, these were large boats traveling along a ride track.  The underwater adventure was achieved by seating guests below the water line and using a series of practical effects like water bubbles and an indoor ride building/cavern.20,000 Leagues under the Sea opened at Walt Disney World, in Fantasyland, opened on October 14, 1971, two weeks after the Florida theme park opened. The attraction was one of several E-ticket rides. Captain Nemo’s undersea adventures came to a close on September 5, 1994.  Briefly replaced by Ariel’s Grotto and Pooh’s Playful Spot, Seven Dwarves Mine Train currently occupies the space once used by this water adventure.

Several of the iconic “Nautilus” ride vehicles have shown up at other Disney resorts.  For a time there was a pair just offshore at Castaway Key, the private island destination stop as part of the Disney Cruise Line. Those have since vanished.

Another of the green submarines is docked just outside Space Mountain at Disneyland Paris.  There, guests have the opportunity to tour the inside of the vessel as they enter “Les Mystères du Nautilus.”

At Japan’s DisneySea, not only is there a “Nautilus” anchored, an updated version of the “20,000 Leagues under the Sea” attraction once again brings guests into the depths of the oceans.

Models and props from the 1954 movie are on display at Disney’s Hollywood Studios, in the One Man’s Dream Attraction.  The large pipe organ from the film has a fitting home too, it’s part of the ballroom scene in the New Orleans Square Haunted Mansion in at Disneyland in California.

The “Nautilus” also made a brief visit to Epcot Center, in Florida.  This was part of the Florida Project event.  See our story on the event here.

One of the most exhaustive compilations of photographs (some appearing in this article), videos, and the history of the attraction can be found at the 20K Ride website.  Highly recommended for anyone wishing to dive deeper into this amazing attraction.

Do you have a favorite tale of undersea adventure that involves the “Nautilus?”  Please share your shanty in the comments below.