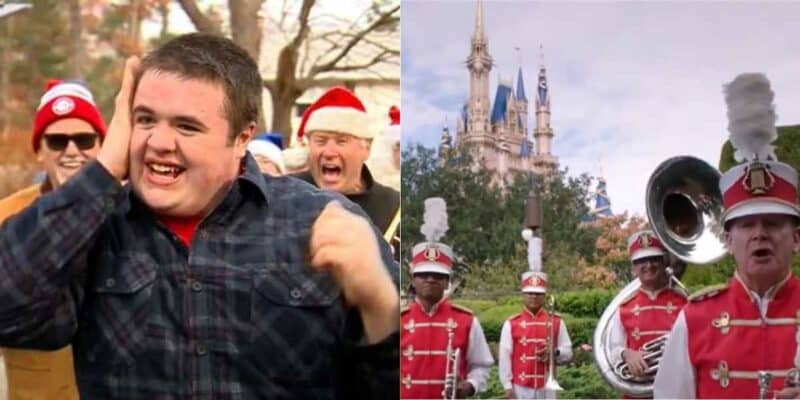 Grab the tissues because we have an extra sweet story to share today. One of the most iconic experiences when visiting Walt Disney World Resort is seeing the Main Street Philharmonic marching band perform down Magic Kingdom’s parade route to Main Street, U.S.A. Well, this inspiring Massachusetts teenager learned he is going to Disney World to march with the band!

Main Street Philharmonic is described as a “Grand Old Band”. The marching band is a 12-piece brass and percussion ensemble that never misses a step or a note as they light up Magic Kingdom Park. They perform a great mix of old-school marches, big band hits, and even familiar classics sometimes matching with any special holidays currently taking place. But, Main Street Philharmonic isn’t the only crowd-pleasing band out there! A teenager name Luke Barry knows how to win over smiles with his neighborhood band.

WCVB first reported the news about an autistic teenager named Luke Barry from Mansfield, Massachusetts. Luke is known for holding an annual Christmas-themed parade in his neighborhood, simply because he absolutely loves marching bands. He calls the neighborhood band, Walnut Street Unicorn Marching Band which draws a crowd for an annual parade.

RELATED: Viral Video of Adorable Ears Made With Earmuffs for Autistic Child

Luke, the almost 17-year-old, provides family and friends interested in marching with an instrument which his mom (Jill Barry) says that he collects year after year. It doesn’t matter if you know how to play the instrument or not, it’s simply about being part of the band.

But, this year’s Walnut Street Unicorn Marching Band parade was an extra special one! Disney’s Main Street Philharmonic heard about Luke and sent a surprise invitation to him, inviting him to march with them at Walt Disney World Resort! “Since you love music as much as we do, we’d be honored if you would join us and march with us through the Magic Kingdom. See you real soon!” the band said in a video message for Luke.

Ready for your daily dose of goodness? Check out the video below:

RELATED: Boy with autism has a heartfelt encounter with Disney Princesses at Disney World

WCVB reports that Luke will leave for Walt Disney World on Saturday (12/4). His trip will be part of the “Disney Parks Magical Christmas Day Parade” and you can see it all on Christmas morning, December 25, 2021, from 9 a.m. through 11 a.m. on ABC and WCVB Channel 5.

Way to go Luke! Anyone else planning to watch as Luke marches with Main Street Philharmonic?

Comments Off on VIDEO: Disney Invites Autistic Teenager to March in Christmas Parade