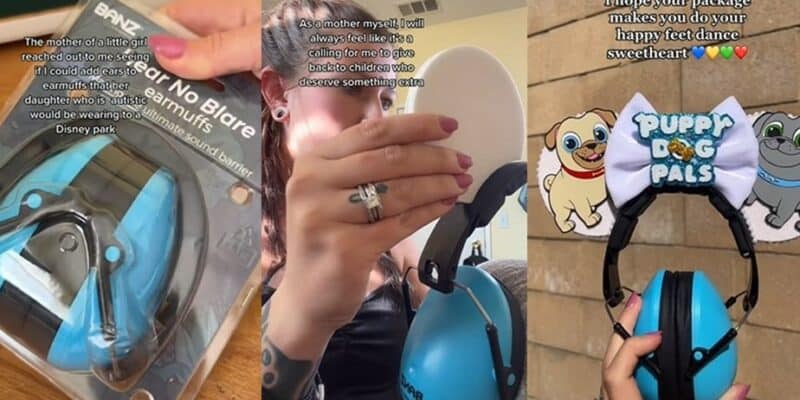 Need a dose of goodness for your day? Look no further! When a TikTok video goes viral, it’s not always the most positive thing. Just recently fans were asking Disney to ban a couple of Park-goers for their inappropriate shirts that went viral. Another video went viral of a grown man bullying a small child because of her hair which resulted in fans coming together in support of the child. You just never know what is going viral next! In this case, a video has hit social media in the greatest way as one talented DIY ear designer took to TikTok to share Disney earmuffs made for an autistic child that is simply magical.

Wearing ears in the Disney Parks is one of those fun Disney experiences everyone should have a chance to enjoy! While people may look at you weird if you walk through your local grocery store with ears on, at Disney, it’s all part of the magic. Well, in this case, specially made ears were needed with an earmuff twist.

TikToker @earsbybecka shares in the video below that she received a request from a Mom that wanted to have ears for her autistic child made out of earmuffs, so her child could enjoy them in a Disney Park. This extremely talented ear designer took on the challenge and created adorable ears featuring the popular Disney Junior series, Puppy Dog Pals.

The TikTok video has gone viral with over 900,000 views and counting! Check it out below:

RELATED: You Can Now Make DIY Disney Ears In Your Own Home

Love the Autism Awareness! Well done @EarsByBecka and way to go to the child’s Mom for requesting such a great idea. The Puppy Dog Pals pup duo, Bingo and Rolly, would surely say this is “pup-tastic”!

What are the most creative Disney ears you’ve spotted in the Disney Parks?