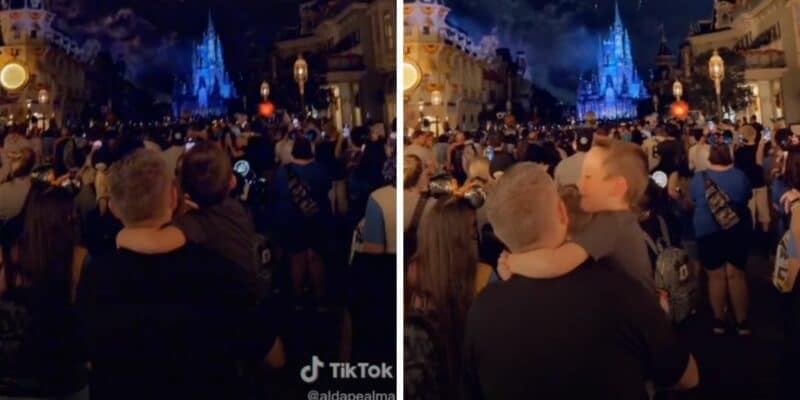 Both Images: Credit Screenshot via @aldapealma

One TikTok video is making its rounds on various social media platforms as many Disney fans are in search of a father and son.

During one of the fireworks showings at Magic Kingdom, a TikTok user, @aldapealma, captured a beautiful moment between a father and son as they stood on Main Street, U.S.A. watching the fireworks. At one moment, you can even see the son lean back, look at his father, and kiss him on the cheek.

The TikToker is now in search of this father and son and is hoping the power of social media gets this video to them.

Within the video, the following words appear along with a beautiful moment between a father and son as they watch the fireworks together on Main Street, U.S.A.:

When in Magic Kingdom I was filming the fireworks and I captured this beautiful moment of this dad with his son. I have no idea who they are, but when I tried to go up to show them the video they were gone. I hope they see this video!

You can see the full video below:

We here at Inside the Magic hope that this helps spread the word and has the video reach a wider audience in hopes of finding this father and son. There truly is nothing like Disney magic!

Have you seen this viral TikTok video yet? Do you know who these Disney World Guests are? Let us know in the comments below if this video reaches this father and son.