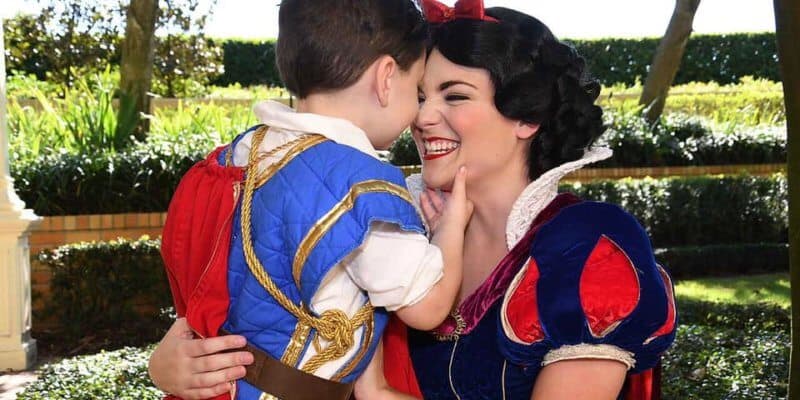 There truly is magic in everyday life, and going to the Disney Parks brings more magic and joy than you could ever dream of. For one little boy with autism, special interactions with the Disney Princesses at Walt Disney World truly made his vacation the happiest it could be.

Amanda Coley visited Walt Disney World Resort in Florida from North Carolina, and ever since her first trip with her son, Jackson, four years ago, she has been sharing photos and videos of her sons’ interactions with Disney Princess on her social media.

Jackson, who goes by Jack-Jack (just like the adorable Disney character from The Incredibles), first went to Disney World four years ago, just before he was diagnosed with autism. Back then, the original Disney Princess Snow White helped him come out of his shell.

“This was about a week before he got, maybe two weeks, before he got diagnosed with autism, and so we brought him on that trip. He was scared of all the characters, just wasn’t sure. Some of them he wasn’t really scared of, just didn’t have any interest in, so he’d walk away,” Coley said to WESH.

Coley has been bringing Jack-Jack to Disney World for years now, and as you can see from the photos and videos she shared this week, her son still shares a bond with Snow White and the other amazing Disney Princesses at the theme parks. He continues to have amazing interactions with the Cast Members at Disney, something that makes so many of us continue to visit the Disney Parks year after year. We truly believe that Disney wants to make every vacation special, no matter your age, background, or life story. And especially when it comes to helping children and adults with disabilities, the Cast Members go above and beyond time and time again.

“They all do it with a smile on their face, and they hug him, and they spend the time with him,” Coley said to WESH. “When you see those moments and the pictures and the video, you have no idea that he’s had any meltdowns or that he’s had any difficulties because he lights right up with them…It’s worth every meltdown we may have to deal with, so don’t think because there’s been any issues that you can’t bring them out and let them have fun because you never know what will affect them, what’s going to make them happy.”

In the videos that Coley shared to Facebook, you can see Jack-Jack interacting with not only Snow White, but also Rapunzel and Princess Tiana! Take a look at the magical moments below:

Coley and her family plan to visit Walt Disney World in 2020 — and we hope that trip is the most magical one yet!

What is your favorite Walt Disney World memory? Let us know in the comments!