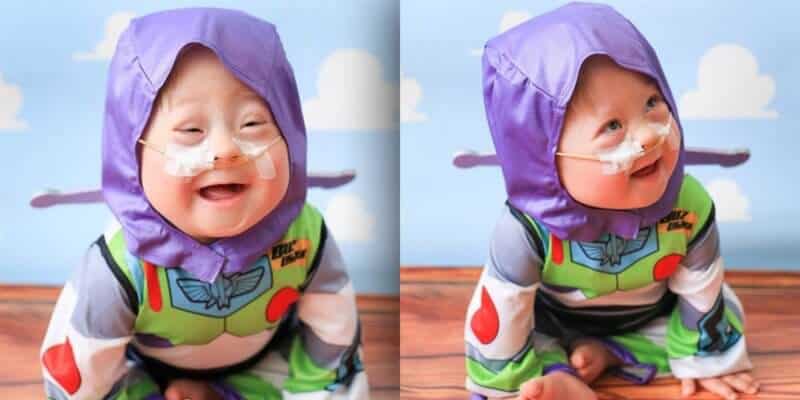 This article was originally published on November 20, but we have since updated it with the most recent information about the photo campaign.

A U.K. photographer’s photo series of kids with Down syndrome shares a message of accepting people with special needs in the most beautiful and artistic way.

Nicole Louise Perkins’s Down with Disney photoshoot series depicts adorable babies, toddlers, and children with Down syndrome as their favorite Disney characters — and the results are absolutely remarkable.

“There is just something so amazing about children with special needs,” she told TODAY.

Back in 2018, Perkins started her Down Right Beautiful campaign to try and shift the way kids with Down syndrome are perceived. Her campaign included 32 babies, children, teens, and young adults with Down syndrome along with their stories as told by their parents. The campaign was highly successful, and this year she has followed up with her Down with Disney campaign.

Perkins, who is a huge Disney fan herself, wanted to show kids with Down syndrome as through they were real-life Disney characters. And since she created these beautiful stories through her photography, the campaign has gone viral.

“As last year’s project was so informative I wanted to create something this year a bit more fun and more of a little celebration,” Perkins said to The Mighty. “The response has been incredible!! I honestly can’t believe the reactions I have had. I am so pleased how happy my images are making people feel.”

Perkins works full time in a school for kids with disabilities, and she hopes to use her art to combat disability myths and celebrate the lives of kids with Down syndrome. She shared, “I hope my campaigns will show people there is so much more to people with Down syndrome than what you read on the Internet or are told in hospitals. They are the best people you could ever meet and the world is a much better place with people who have Down Syndrome in it.”

In a recent Facebook post, Perkins shared her favorite photos from each of the Disney character shoots, along with a Walt Disney quote (she is a massive fan, after all!).

Down With Disney 2019…
Created to celebrate the beauty of Down Syndrome. So far our posts have reached over 8millon people thanks to Facebook! What a way to spread awareness! ??
Here is one of my personal favourites from each shoot. If you haven’t already and want to see more they are all on my page. Each and every child involved has Down Syndrome and don’t they just look FABULOUS!
As Walt Disney said- “If you can dream, you can do it. Always remember that this whole thing was started by a mouse.”

Down With Disney 2019… Created to celebrate the beauty of Down Syndrome. So far our posts have reached over 8millon…

“I hope the project helps people realize that Down syndrome isn’t scary and that the people that have Down syndrome don’t have less of a life,” Perkins said to TODAY. “They have great lives and along with that, they make the lives of the people around them much richer.”

The photographer has also received messages of love and encouragement from people worldwide who have been touched by her photo campaign. She said that her photos have reached over 14 million people on Facebook alone, and that number keeps climbing.

“Comment after comment of how happy the images had made people, how much they love them and just so much positivity — it left me feeling so full inside,” she said to TODAY. “One of the best things was a personal message I received of a woman saying thank you and that her thoughts have now changed if she was to have a baby with Down syndrome and that was the best because that is the whole aim of the campaign.”

“One guy has brought a Down With Disney calendar for his tattoo shop the other side of the world.. now if that’s not helping raise awareness I don’t know what is!” wrote Perkins.

As big Disney fans ourselves, we can see why it would be so special to use Disney characters as a way to showcase the beauty of these children. Disney films are filled with stories of bravery, friendship, courage, love, acceptance, and joy — all qualities of life we hope to fully embrace ourselves. From these photos, it’s clear how happy and strong each of these children are.

Here are Perkins’s favorite photos from each of her Disney-inspired photo sessions below!

Snow White and the Seven Dwarfs

Comments Off on Kids with Down syndrome pose as their favorite Disney characters – and it’s magical!