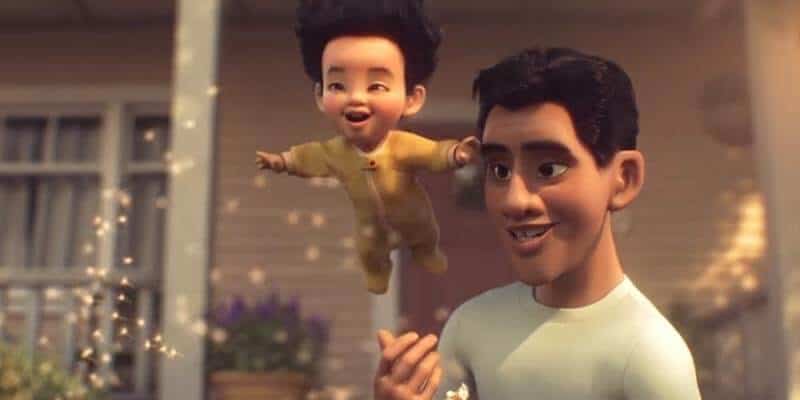 Disney has always set itself apart by creating moving stories that are filled with heart. One of those new stories comes straight from Pixar and into your preferred viewing device thanks to Disney+. This moving new short is Pixar’s “Float”.

Float is the story of a father and his son, who happens to have the ability to defy gravity or Float! The story is meant to reach audiences in general, but the creator of the short, Bobby Alcid Rubio, wrote it based on his real relationship with his son who is on the autism spectrum.

Throughout the story, you see the dad doing everything he can to avoid situations where his son would stand out because of his special ability. He tries weighing him down and avoids contact with those who know the truth about him.

It is evident as viewers watch the film that the father is clearly doing these things out of love and protection for his beloved son. But there comes a point in the short that things get out of hand and the father gets upset at his child, causing him to break down and cry.

That crucial moment in the film is a gut-wrenching moment for any parent that has struggled with a child with special needs, or anyone that knows someone who has. It’s an important moment as we all feel empathy towards the father, the son, and the situation that caused the breakdown to begin with.

This film also conveys empathy in other areas as it features a Filipino-American Family, a first for Pixar. Therefore, Float’s core story could also be a story about assimilation and growing up as a minority.

Without giving away any spoilers, we agree that this film is a must-see. It serves as a powerful reminder that kindness, patience, and understanding should be the presiding force among all of us as we live together in this place we call home. And that more often than not, our differences are a gift that shouldn’t be hidden, but instead, should be embraced and celebrated.

Have you seen Pixar’s “Float” on Disney+ yet? What did you think of this moving short film?