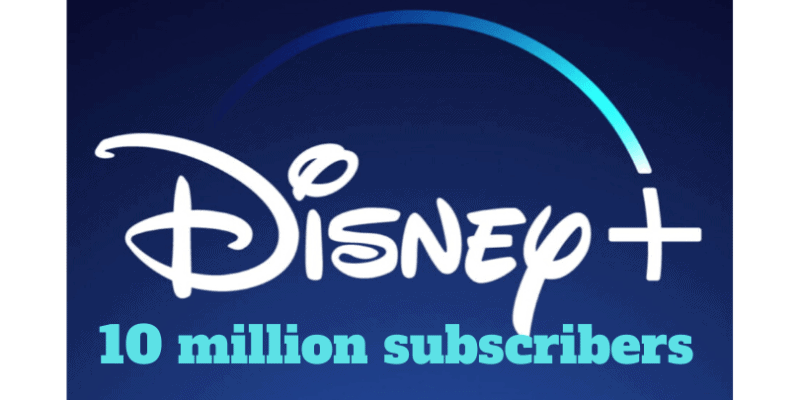 Have you subscribed to Disney+ yet? If so, you’re in good company. A company of 10 million fans, exceeding expectations by Disney.

In an achievement that far exceeded even the company’s projections, Disney announced that the streaming service hit more than 10 million subscribers as of launch day yesterday.

Some business and market analysts had predicted it would take the Walt Disney Company about 12 months to get to the 10 million mark on sign-ups for its new streaming service. Surely today they’re rethinking that number-crunching.

Before the launch of the all-new Disney+ streaming service, almost 2 million people had signed up to stream everything the House of Mouse has to offer. About 100,000 of those signed up on the Sunday before Tuesday’s launch alone.

It would appear word travels fast.

The surge in the number of subscribers can only mean good things for the Walt Disney Company that bet the house on the new streaming platform. The company has invested billions into the new service, understanding that the way of the future in home entertainment is streaming. To remain competitive, the Walt Disney Company had to move into the streaming arena, where Disney+ will compete for sign-ups with Netflix, Amazon Prime Video and other services who’ve got several combined years’ seniority over Mickey’s family.

Making a success of Disney+ was so imperative that the media giant spent over $7 billion on developing it and also made the decision to forgo a theatrical release for the live-action version of Lady and the Tramp, opting instead to premiere the new movie exclusively on Disney+ from day one.

Ten million subscribers—and who could blame them? Disney+ went live on Tuesday with almost 500 films and 7,500 TV episodes. The entertainment ranges from Disney classics from “inside the vault,” animated films and Pixar favorites to Marvel films and just about everything Star Wars, including the brand-new Disney+ original The Mandalorian, created and written by Jon Favreau.

Original content is one of the hallmarks of Disney+. In fact, Disney+ will be the only place you can see High School Musical: The Musical: The Series, The Mandalorian, Lady and the Tramp, and other original films and shows.

Sign-ups are painless at the Disney+ website, and streaming is easy too—all you need is a compatible device, and chances are, you already own one—Apple TV, iPhone, iPad, Android smartphones, tablets and Android TV, Amazon Fire TV and Fire tablets, Google Chromecast, LG, Samsung and Sony Smart TVs, Roku TV, Xbox One consoles, and more.

Did you already subscribe? If so, be honest—what did you stream first, and did you binge-watch anything on Day One? Let us hear from you in the comments section below.