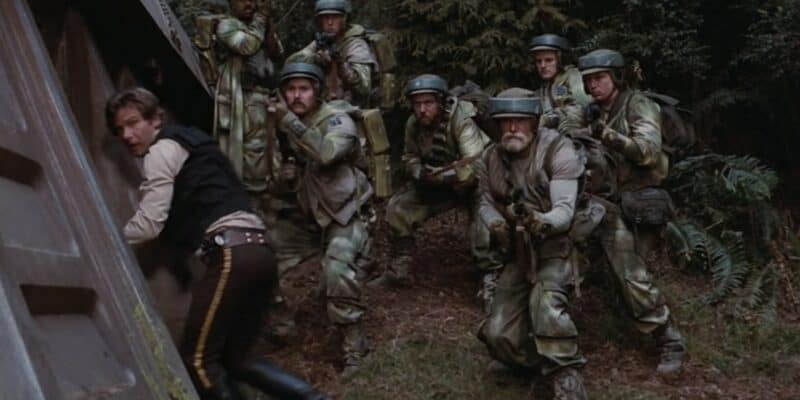 With a franchise lasting as long as Star Wars has, there are bound to be contentious moments that challenge the continuity of the series. George Lucas’ epic space opera did begin in 1977 after all, with Star Wars still going strong into its fifth decade.

It seems creating anything new would be inexplicably challenging when considering something like the Skywalker Saga timeline, but as has been evidenced, Lucasfilm loves to incorporate original stories into the gaps left by the prequel, original, and sequel trilogies. Whether it’s through comic books like Marvel Comics’ Darth Vader or upcoming novels like Adam Christopher’s Star Wars: Shadow of the Sith, Star Wars is revealing — and sometimes retconning — previous events in the franchise.

One rather specific moment of uncertainty in the Star Wars franchise has recently been stirred up after The Clone Wars and The Bad Batch star, Dee Bradley Baker, shared an image on his Instagram.

Sharing to his 60k followers, the animated series star posted an image of a Star Wars Little Golden Book which immediately reignited debate amongst fans.

From a Little Golden Book a fan shared with me at NY ComiCon.

The post was immediately reshared to Reddit where Star Wars debated the contentious image. Why? The character featured in the Little Golden Book looks surprisingly like one Star Wars: Episode VI — Return of the Jedi (1983) character despite being named Rex in the pictured story. Many fans will know Captain Rex — who is voiced by Baker — from his long-standing presence in Star Wars animated media, namely Star Wars: The Clone Wars, Star Wars: The Bad Batch, and Star Wars Rebels.

However, according to a 2002 publication, The Official Star Wars Fact File 44, the character that helped Han Solo during the Battle of Endor was named Nik Sant, making the character a part of the Star Wars canon even in such a small role. This hasn’t stopped fans from speculating that Sant is, in fact, Rex, so much so that Lucasfilm’s Dave Filoni addressed the similarities within the Star Wars universe back in 2016. The executive producer then went on to neither confirm nor deny the idea that Sant is the Clone War Captain after the Star Wars Rebels finale in 2018 confirmed Rex fought in the Battle of Endor against the Galactic Empire.

Filoni revealed in an interview with IGN he ultimately chose to not canonize the theory because he felt that laying down an already established character prior to his coming to Star Wars wasn’t correct, adding that Rex could have been present at Endor and not be Sant, even though some fans could choose to believe that Sant and Rex are the same individual while others choose to not do so.

If they really did replace Nik Sant then that’s just sad. Initially Filoni said that he wasn’t going to replace Nik because he didn’t create Nik, if he really did change stances on that then rip Nik. At the same time though I’m hoping that’s really Rex and not Nik in the image since it’s not clear what is going on, just a really misleading title by op

Salarian_American also weighed in on the debate:

They did not replace Nik Sant. Nik Sant is still Nik Sant, and Rex was also present for the Battle of Endor but does not appear onscreen in RotJ

While some thought the idea of replacing Nik Sant in the Star Wars saga canon was a deplorable action, others were quick to show support of retconning the character to be Captain of the clone troopers, Rex.

Honestly I don’t get why anyone care about Sant in the slightest. From my perspective making Sant and Rex the same person is only an improvement.

I honestly don’t understand the attachment to Nik Sant. It’s just so bizarre for a character that is literally just a Santa joke and is never brought up anywhere else.

One other user, InfiniteDedekindCuts, makes a bold statement about their own headcanon, and their assumption of Filoni’s:

And honestly, anything in Dave Filoni’s headcanon might as well be canon.

Even though nothing in canon confirms it, I’m assuming Nik Sant and Rex are the same person until a canon source directly contradicts it.

With Filoni taking a firm stance on not replacing any Star Wars characters that existed before his time with Lucasfilm, it is unlikely that any canon media will directly confirm the replacement of Nik Sant with Rex. As the Star Wars galaxy continues to build with shows like The Mandalorian, The Book of Boba Fett, the upcoming Ahsoka Tano series, Ahsoka, and the Jedi Knight event, Obi-Wan Kenobi, could Lucasfilm get tangled in its own web?

What do you think of the Nik Sant and Captain Rex debate? Let us know in the comments down below!