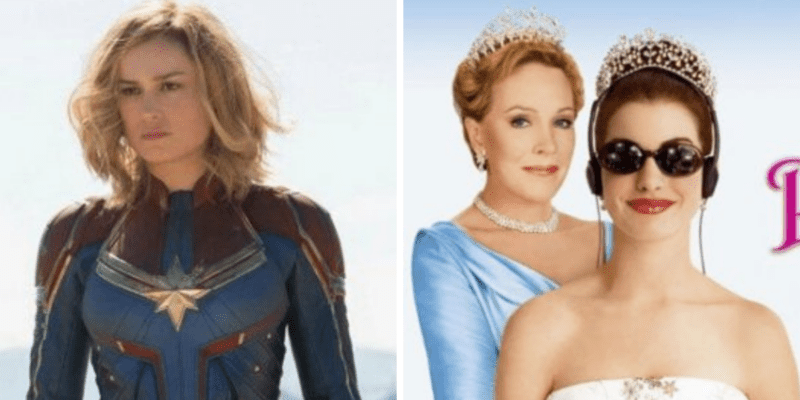 Brie Larson is a huge star in the Marvel Cinematic Universe, and now her stardom may be getting sprinkled with some Disney princess magic.

Larson is already famous with Disney fans as the heroic Carol Danvers, introduced in Marvel Studio’s Captain Marvel (2019). She has since appeared in the record-breaking Avengers: Endgame (2019) and will star in the upcoming MCU project The Marvels (2023).

The Princess Diaries (2001) fans are eagerly awaiting more news on the upcoming sequel, with Anne Hathaway confirming the movie back in an interview with Andy Cohen.

And now Brie has posted a photo that may hint at an upcoming role in the Genovia princess story.

I went heavy on the Princess Diaries vibes

I went heavy on the Princess Diaries vibes💕 pic.twitter.com/SbsEe57nao

The photo sees Larson dressed in a black gown accessorized with gloves similar to those worn by Anne Hathaway and Julie Andrews in the popular Disney hit movie.

Brie is known to indicate her love for movie franchises, with The Captain Marvel actress previously confirming that she auditioned for all three of Disney’s Star Wars sequel trilogy films, but did not get picked to star. A new report back in May indicated that Larson was in serious talks with Disney and Lucasfilm to play Luke Skywalker’s wife, Mara Jade Skywalker in an upcoming Star Wars project.

So does this new photo hint at Brie’s desire to be in the new Princess Diaries movie?

It has been 20 years (yes, 20 years) since Mia Thermopolis (a.k.a Anne Hathaway a.k.a. Princess of Genovia, and now Queen) was introduced to fans, and 15 years since the sequel The Princess Diaries 2: Royal Engagement (2004) hit our screens, but that doesn’t stop us theorizing over what came next for Mia, Lilly (Heather Matarazzo), and Queen Clarisse Renaldi (Julie Andrews).

We’ll keep you posted on any future Princess Diaries 3 news as we hear it, and will be thrilled when Disney releases confirmation of the plot and cast.

Or as Princess Mia would say: “Shut Up!”.

What do you think will happen in the upcoming Princess Diaries sequel? Let us know in the comments!

Comments Off on Brie Larson Hinting at ‘Princess Diaries 3’ Role?