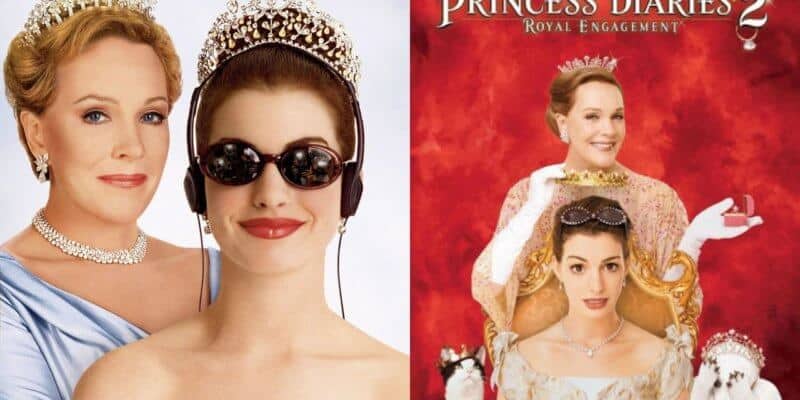 Back in 2001, the world was graced by Julie Andrews (a.k.a. Queen Clarisse Renaldi, a.k.a Queen of Genovia). We also got to meet Mia Thermopolis (a.k.a Anne Hathaway a.k.a. Princess of Genovia, and now Queen). Disney’s The Princess Diaries became an instant hit, leading the way for the second film The Princess Diaries 2: Royal Engagement to also blow up the box office.

“There is a script for a third movie. There is a script. I want to do it, Julie [Andrews] wants to do it, Debra Martin Chase, our producer, wants to do it. We all really want it to happen, it’s just we don’t want to do it unless it’s perfect, because we love it just as much as you guys love it. It’s as important to us as it is to you. And we don’t want to deliver anything until it’s ready, but we’re working on it.”

Sound the castle bells, people! Because that news was epic. Fans began to freak out over the rumors of a possible 3rd film in the franchise. It seemed that not only was there a script written, but the whole team wanted to reunite. So let’s take a look at where we stand today with a possible third The Princess Diaries film.

From Happy Days to Pretty Woman, Gary has brought countless classics to screens big and small. And right before his death in 2016 on Larry King Now he said he was working on a third installment for The Princess Diaries franchise:

Well, they talk about it. Disney always likes to announce things, so they tell Garry, ‘Shut up, we’ll announce it.’ [Anne Hathaway] came to my office, she was quite pregnant… she puts her computer on the table, pushes three buttons, there’s Julie Andrews on Skype in Long Island. And we have a meeting. I hope they do it.

The original film’s director passed at the age of 81 and it’s sad to know that although he wanted to create a third film, he did not get the chance to see it through. The positive things we can pull from this are:

From what we discussed, we know she is interested. But what specifically does our Queen have to say about returning to Genovia? In an April 2020 interview with The Talk, Andrews said:

It’s long been talked about but nothing sort of been on my desk or anything like that. I think I would. I’m going awfully old and crotchety. I’m not sure if it’s the right timing, but I think to work with Annie [Hathaway] would be lovely again. And yeah, sure, I would be up for it. I think we should wait if the script comes in just wait for that.

Wait. We thought there was a script for this already. Perhaps Andrews is hinting at the fact that it’s not the official script and she needs to wait for the go-ahead. In film and tv, nothing is really set until an actor receives their offer, and even then things can change. But we do know that she is up for it, and also possibly going insane since she referred to herself as ‘crotchety’. No, Julie, you are most definitely not crotchety.

Best friend to Mia, Lilly Moscovitz, spoke on The Morning Show in July 2020 and assured everyone that this is a film that they want to have done!

I know there is a script written, and we lost the captain of our ship, Garry Marshall, a few years ago. I think we have a little bit of a fire under our butt to get this done.

The hype combined with the will to finish what Gary started could be the slam dunk we need to make this film come to life!

Other cast members are ready to work!

The lovable Chris Pine said to EW “Have you been reading my diary?” after they asked if he would want to do the third film. And if you are anything like me, you need to see where Princess Mia’s love life has ventured on to. Plus, that response was so cheeky. I need to hear more!

Even Mandy Moore is game to return! She told Elle:

If I’m going to be involved, I would be down for a cameo—maybe she could make amends with Mia and apologize for being a bully when she was younger. She was insecure, going through a difficult time in her life and [has now] reflected on why that wasn’t okay.

There are also rumors the show may be turned into a spin-off series on Disney+. It sounds like we could see Anne and Julie, but they would not be the main focus. Although still a rumor, the story seems to follow Mia’s newly discovered half-sister as she comes to Genovia. Personally, I would love to see both a third film as well as a series of The Princess Diaries.

At this point, only time will tell when and how we will return to Genovia, and what characters and stories we will find there.

Do you think there should be a third film to the franchise? Let us know below!