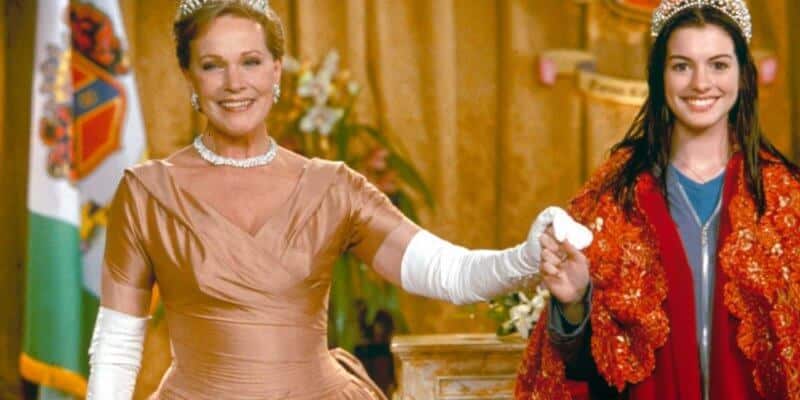 Shut up! Anne Hathaway just confirmed that a third “Princess Diaries” film is in the works, and we may not have to wait too much longer before Princess Mia and Queen Clarisse are reunited on the big screen.

It’s been well over a decade (15 years, to be exact) since “The Princess Diaries 2: Royal Engagement,” the sequel to “The Princess Diaries,” hit theaters, and we’ve been waiting for a third film ever since. Hathaway stole our hearts with her relatable personality when she portrayed Mia Thermopolis onscreen (fans of the bestselling book series by Meg Cabot would agree), and Julie Andrews as Queen Clarisse Renaldi was the grandma we all always wanted. It’s no wonder fans have been begging for a third movie for years. And now, we may be getting our wish come true.

Hathaway spilled some details regarding a third film while interviewing with Andy Cohen on “Watch What Happens Live.” In the interview, a fan asked if Hathaway knew anything about “The Princess Diaries 3” since the author of the book series already revealed that there is a script for a third film.

“There is a script for a third movie,” Hathaway said. “There is a script. I want to do it, Julie [Andrews] wants to do it, Debra Martin Chase, our producer, wants to do it. We all really want it to happen, it’s just we don’t want to do it unless it’s perfect, because we love it just as much as you guys love it. It’s as important to us as it is to you. And we don’t want to deliver anything until it’s ready, but we’re working on it.”

That’s all we know about the film so far, but if you’re a longtime fan of the films and books, this news is sure to bring as big of a smile to your face as it does to Hathaway’s in the interview. Disney has yet to confirm a third movie in the “Princess Diaries” series, but this is one sequel we know we’ll be lining up to see. We hope an announcement will come soon!

Are you excited for a third “The Princess Diaries” film? What Disney sequel would you like to see in theaters?