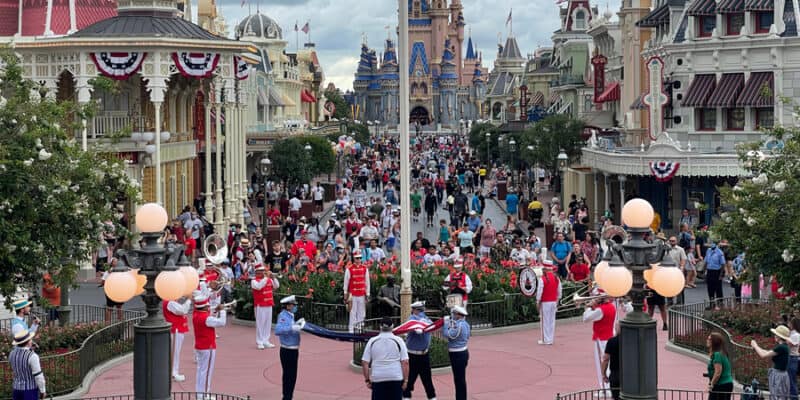 When Guests walk onto Main Street, U.S.A. at both Disneyland Park at Disneyland Resort in Anaheim, California and Magic Kingdom Park at Walt Disney World Resort in Orlando, Florida, they are greeted with the sight of large American flags. This is a touching sight that moves many Disney Parks Guests.

In fact, the nightly flag retreat at both U.S. Disney Parks is a time-honored tradition. Disney World officially describes the meaningful event as:

Say the pledge of allegiance and hear the trumpet fanfare sound Retreat in this daily tradition. Watch as the American flag is lowered, while the “Star Spangled Banner” plays.

The ceremony is a tribute—a thank you to veterans for their service, sacrifice and dedication to protecting our country.

“It has been an honor for our security cast to keep our flag flying every day over Magic Kingdom since the park first opened in 1971,” said Army veteran Eileen Underwood, Magic Kingdom’s senior security manager. “We were thrilled to resume our daily flag retreat ceremonies to honor our country and those who serve around the world in defense of our freedoms. It’s a special moment for all our guests that really reaffirms the feeling that this is truly a magical place.”

As you might have noticed if you’ve ever seen the flag retreat, however, only one flag is taken down each day at each Disney theme park — the flags at the entrances of EPCOT, Disney’s Animal Kingdom, Disney’s Hollywood Studios, and Disney California Adventure are properly taken down by security Cast Members without added fanfare.

But, what about the flags that are on top of the buildings on Main Street, U.S.A. and elsewhere on Disney Park property? These are, shockingly, not official American flags!

The flags on the tops of the buildings, which are never taken down, are not American Flags. They do not have 50 stars (count them) only 45, so they are not officially American Flags!

So, next time you are at Walt Disney World Resort or Disneyland Resort, you can rest assured that all of the REAL American flags onsite are being cared for according to the official United States of America Flag Code.

Did you know this fun fact about flags at Disney Parks?

Let the expert team at Academy Travel help you plan your next magical Disney Parks vacation to Disneyland Resort and the Downtown Disney District or Walt Disney World Resort and the Disney Springs neighborhood!