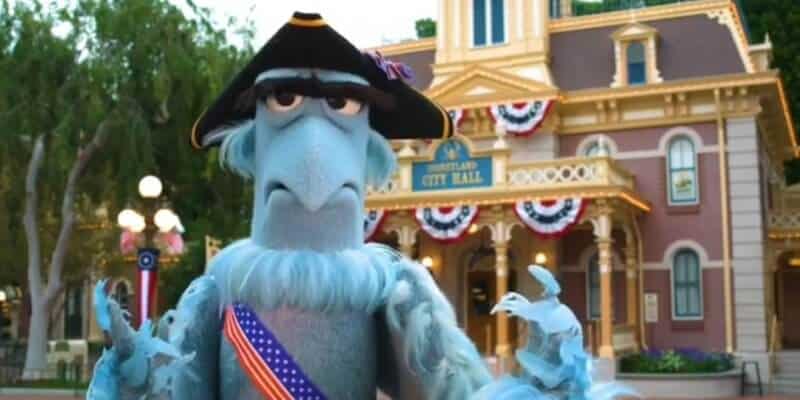 Before Muppet Vision 3D was replaced by Mickey’s PhilharMagic located in Hollywood Land in Disney California Adventure, Guests who visited Disneyland Resort were able to enjoy the zany humor of The Muppets and celebrate the Fourth of July with Sam the Eagle’s grand finale show called A Salute to all Nations but mostly America.

Even though The Muppets are long gone from Disneyland Park, they might make exclusive appearances from time to time. In celebration of Independence Day, the patriotic Sam the Eagle could not wait to celebrate The Flag Retreat Ceremony and Fourth of July fireworks show in Disneyland today.

As Sam continues to share his deep love for his country, Walt Disney Imagineering on Instagram shares another iconic Muppet will be performing on television tonight and shares,

Happy Fourth of July greetings from Sam Eagle’s mission to celebrate at the Happiest Place on Earth!

Plus, catch on @KermittheFrog performing on “A Capitol Fourth” tonight at 8/7c on PBS to celebrate the 4th of July with all-star performances and tributes from around the country. #July4thPBS ??

Are you a huge devotee of Kermit and the gang? Muppet fans can still enjoy this live in theater show located at Grand Avenue in Disney’s Hollywood Studios.

This attraction was the last collaboration between the creator and legendary puppeteer Jim Henson and Walt Disney Imagineering. Check out the official Muppet Vision 3D description as Walt Disney World states,

Take your seat in a perfect replica of the Muppet Theater from the classic television series, The Muppet Show. As the curtain rises, Kermit, Miss Piggy and the whole Muppets menagerie appear in eye-popping 3D. They’re taking you on a zany tour of their lab and showing off their new movie-making invention: Muppet*Vision 3D.

Be Prepared for Surprises
With onscreen musical numbers and live in-theater special effects, it’s a show kids of all ages will love—and guaranteed to bring down the house.

Do you enjoy Muppets Vision 3D in Walt Disney World? Do you think it needs to be returned to Disneyland? Let us know your thoughts in the comments below!

Planning a Disney trip and need advice? Our friends at Academy Travel are EarMarked Diamond! Click the link for a free quote today!