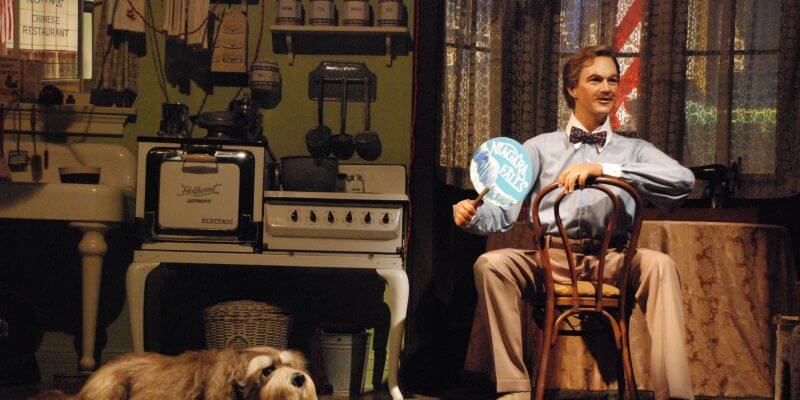 Summer is officially here and Fourth of July is now not too far off. To kick off summer time celebrations I’d like to offer my personal patriotic favorites from around the Magic Kingdom in Florida.

Located in Disney’s Hollywood Studios, this hilarious variety show unfolds as only a Muppet managed production can take place: in chaos.  The patriotic pleaser here is Sam Eagle’s performance.  “A Salute to all nations but mostly America,” is the kind of pride we expect from Sam.

In addition to tracking the progress of technology through the ages, the Magic Kingdom version of this classic Disney attraction uses major holidays as part of the story telling vehicle.  Here, in Act 2, our host John is celebrating the Fourth of July circa the 1920’s.

There’s no better place at the Magic Kingdom to celebrate American history than Liberty Square. Replicas of the Liberty Tree and Liberty Bell provide a perfect patriotic backdrop for this destination: The Hall of Presidents.  44 men, who served as our country’s leaders, over the past 240 years, come to life in this animatronic history lesson.

Just outside of the Hall of Presidents, also in Liberty Square at the Magic Kingdom, is a brand new experience: Great Moments in American History.  Kermit and company come together to share a few of our nation’s proudest moments.

Around the corner from the Magic Kingdom is Walt Disney World’s second theme park Epcot.  At the very back of the park, in the center of the World Showcase countries, is the American Adventure attraction.  Here Benjamin Franklin and Mark Twain narrate depictions of American history, including the Revolutionary War, Civil War, and Great Depression. In addition to this amazing animatronic show, this ultimate tribute to the United States of America contains a small display of artifacts significant to American history.  If the timing is right the Voices of Liberty might perform in the rotunda prior to the main show.

Add to this red, white and blue collection Disney’s amazing fantasy in the sky firework displays and a performance by the Spirit of America Fife and Drum Corps for the perfect patriotic plan this season.

What are some of your favorite flag waving adventures from Disney?  Please share these sparklers of summer fun in the comments below.

Comments Off on FAV FIVE: Patriotic things to do at Walt Disney World in Florida