I’ve written about my introduction to Walt Disney Imagineering, putting me on a project presenting some of EPCOT Center’s original films. Getting those films completed in time for the opening of the EPCOT Center in 1982 was hard. Getting the Golden Dream sequence of The American Adventure was practically a nightmare.

There was a theme for the sequence: Dreamers and doers from World War II through modern times. Randy Bright and Bob Moline wrote a song. It had even been recorded and was ready to go. But what no one seemed to know is what the film should look like. And the park built on Walt Disney’s dreams was just six months out from the opening day.

Several filmmakers were working hard on concepts for it, including Jack Boyd, one of Disney Animation’s effects animators, producing the Theater One film for Universe of Energy. Boyd developed an abstract animated approach to all those “dreamers and doers,” complete with an animated eagle flying through the various shots. Rolf Darbo, who had produced the live-action shoot of the World War I, Eddie Rickenbacker shootout, and the Two Brothers sequence, was working on a different still photo version. There was also an edited montage version of various pieces of film and photos, a straightforward approach. But it wasn’t working.

I was asked to set up a screening on Stage Two on the Walt Disney Productions lot, where the postproduction for EPCOT Center’s films was headquartered. The stage had been transformed into the world’s largest screening room. This screening included all of the various versions of the film.

Rick Rothschild, creative director of The American Adventure, flew back from Florida, supervising the installation and testing, and programming of the Audio-Animatronics-driven show and several other pavilions. Randy Bright was there, too, as well as Don Henderson, the manager of WED Film Production at the time, along with many of the others involved in all the EPCOT Center films. 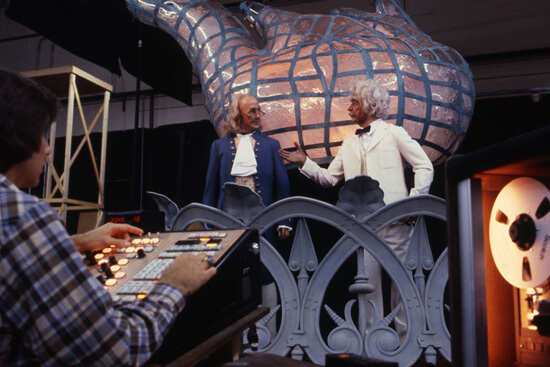 First, the song was played, then all the footage from the various efforts was shown. Lots of discussions followed among the approximately 30 people there. Finally, Don Henderson spoke up and said, “Let’s ask Rick what he thinks it should look like.”

So everyone turned to Rick, who at the time looked a lot like a young Mark Twain, mustache and all, thought for a moment and said these immortal words, “I think it should be an ethereal dream-like reality with a soft, hard-edged matte.” Stunned silence. Then a unanimous, “Huh?” Brice Mack, a former storyman for Walt Disney’s shorts unit, finally spoke up and said, “I think I know what to do.”

Brice was one of the unsung heroes of Disney and was good at figuring things out. Don asked him what his idea was, to which Brice replied, “I need to go do it and show you. Give me three weeks.” Randy and Don looked at each other, gave Brice the okay, and off he went, production number in hand.

Two weeks later, Brice stopped by my desk. He wanted me to set up a projection mockup with three 35mm film projectors, all to be synced to the sound playback system. I asked the format (it was Cinemascope) and went out and worked with the projection engineer, Walt Seifert, to figure it out. We had it ready the next day. I called Brice, and he came over with three reels of film and the soundtrack for a private test screening with just him, the three projectionists, and myself.

On one reel was a series of shots flying through clouds. On the other two reels were alternating shots moving images of, yes, dreamers and doers that looked like there were magically floating across the clouds. There were also lots of editorial grease pencil marks indicating dissolves. But I could already tell it was going to be magical.

The next day it was shown to Randy, Don, and everyone else, and enthusiastically approved. It would take another six weeks to get the finished film through the special photo effects department, but we finally had a winner. The nightmare was now the polished dream that Randy had envisioned while developing and writing the show. 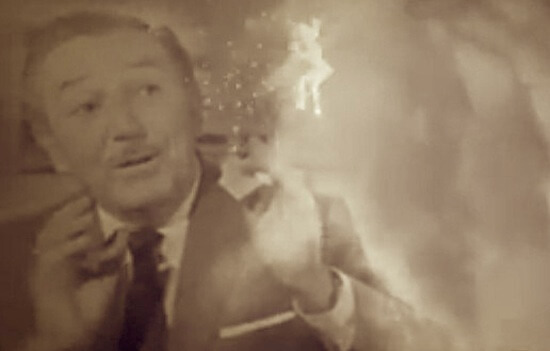