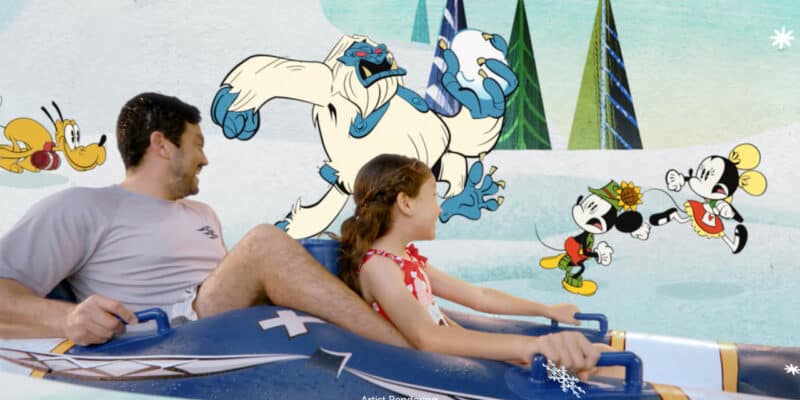 When The Walt Disney Company announced details about the upcoming Disney Wish cruise ship, which will set sail from Port Canaveral in June 2022, many fans were excited to learn more about the AquaMouse — the very first Disney attraction on a Disney Cruise Line vessel!

At the time, a press release from Disney described the attraction — which will feature animation similar to the ever-popular Disney Parks Mickey & Minnie’s Runaway Railway ride — as:

Families will be immersed in “The Wonderful World of Mickey Mouse” animated shorts aboard AquaMouse, the first-ever Disney attraction at sea. Complete with show scenes, lighting and special effects, and splashtacular surprises, this first-of-its-kind water ride will send guests on a fun family adventure through 760 feet of winding tubes suspended high above the upper decks. As the story goes, Mickey and Minnie are starting their very own seaside excursion company — aptly named “Port Misadventures” — on board the Disney Wish, and adventuresome cruisers will join them on an undersea excursion to Mermaid Lagoon that will inevitably (and hilariously) go awry.

Now, Disney Parks Blog has released additional details about this exciting Disney Wish attraction. Specifically, we now have more information about the new adventures that Guests will embark on when experiencing the AquaMouse, the very first Disney attraction at sea!

Here’s what Disney shared on Friday!

When we announced the Disney Wish a few months ago, we introduced you to AquaMouse, the first-ever Disney attraction at sea. We even shared details about the ride’s original show “Scuba Scramble” — inspired by “The Wonderful World of Mickey Mouse” animated shorts —which will immerse guests in a hilarious underwater adventure with Mickey Mouse and Minnie Mouse through show scenes and special effects.

If you thought that sounded cool, just wait until you hear this… I’m excited to share that our guests are in for double the fun aboard AquaMouse, because we’ve developed not one, but two brand-new original animated adventures to experience on this wild water ride!

Our second show is “Swiss Meltdown,” where Mickey and Minnie will invite you on a mountain sledding excursion that will inevitably (and hilariously) go awry. When the sun comes out and the snow begins to melt, you’ll be off on a frantic dash to the mountaintop while trying to avoid obstacles like avalanches, leaky rock walls and waterfalls — oh, boy! The story is inspired by one of the Emmy Award-winning “Mickey Mouse” shorts, “Yodelberg,” and composer Christopher Willis adapted his iconic score from the episode for the attraction.

There are many fun Disney easter eggs to catch during a ride on AquaMouse, such as an appearance by the abominable snowman from the Disneyland attraction Matterhorn Bobsleds. One of my favorite details is that Chip and Dale are hiding in each show, hitchhiking their way to Disney’s private island of Castaway Cay. Good luck trying to spot them amid the 60-plus water blasters, misters and pop jets that you’ll encounter along the way!

Disney also released the following new video about the AquaMouse:

Although Guests can once again take Disney Cruises domestically, there are still a number of COVID-19 related restrictions in place onboard Disney cruise liners.

However, Disney is planning a huge return to sailing in 2022. As previously mentioned, the fleet’s first Triton Class cruise ship, the Disney Wish, will take her maiden voyage in June 2022.

Are you looking forward to your next Disney Cruise Line vacation?

Let the expert team at Academy Travel help you plan your next trip to Castaway Cay in the Bahamas or any other DCL destination worldwide!

Comments Off on Amazing Details Unveiled About NEWEST Disney Attraction (at SEA!)