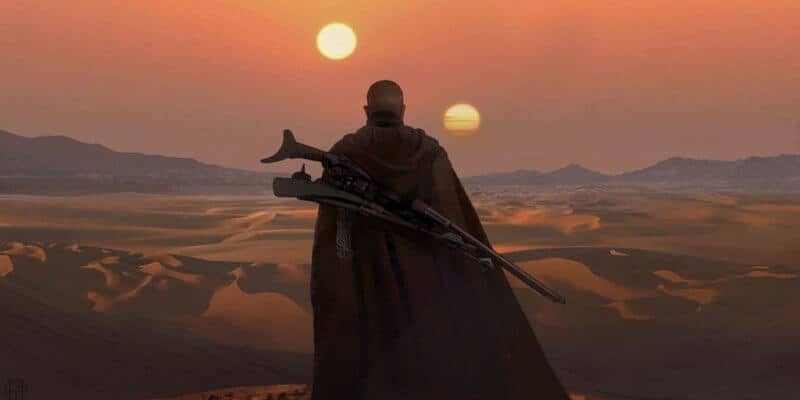 Brendan Wayne — grandson of legendary Western actor, John Wayne — has cemented his own place in Hollywood, not as a cowboy, but as an action actor and producer. Wayne made a name for himself in the Star Wars franchise as the stunt double and stand-in for Pedro Pascal (Din Djarin) in Jon Favreau and Dave Filoni’s The Mandalorian.

Now, it seems that Wayne is also involved in The Mandalorian‘s “next chapter”, The Book of Boba Fett. The newest live-action Star Wars series recently finished filming and it is seemingly set to be even grittier than its predecessor.

“I think that’s what we as an audience, I think, are going to get from The Book of Boba Fett. A lot more of that kinda feel. He gets even grittier than Mando did. I feel like he doesn’t have the choice because he really was a different kind of character.”

This echoes what both showrunner Robert Rodriguez and Fennec Shand actress Ming-Na Wen have said about the upcoming show. Rodriguez shared that his Boba Fett series will be “all killer, no filler”, while Wen told ComicBook.com:

“Tonally, you know, Mando is very much a loner except for his relationship with Grogu, so just the dynamic that there’s now a team of between Boba and Fennec. I think that already creates a different quality for the show. Yeah, that’s about all I can say.”

At this time, little is known about the specifics of The Book of Boba Fett, except what we learned in The Mandalorian Season 2 finale episode post credits scene when Fett himself — alongside Wen’s Shand — overtook Jabba’s throne on Tatooine, unceremoniously killing Bib Fortuna (Michael Carter).

It was after this that Han Solo (Harrison Ford) was encased in carbonite and Princess Leia (Carrie Fisher), Jedi Knight Luke Skywalker (Mark Hamill), and their cohorts launched a daring plan to rescue him from Jabba the Hutt’s palace.

At this time, it is unknown if Brendan Wayne’s return to the Star Wars universe will be as a stand-in for Morrison, or if the rumors of Pascal returning in The Book of Boba Fett are true.

The Book of Boba Fett will air on Disney+ in December 2021.

What do you think about Brendan Wayne’s comments about the future of The Mandalorian saga?