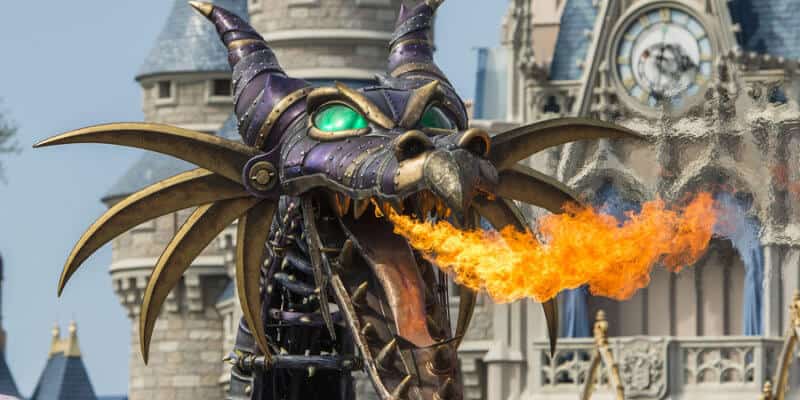 Walt Disney World recently announced that a brand-new event would be coming to celebrate the Halloween season. Despite not seeing Mickey’s Not-So-Scary Halloween Party return this year, Guests can look forward to a new after-hours event called Disney After Hours Boo Bash.

Disney After Hours Boo Bash will be a special three-hour event where Guests will experience party music, decorations, and character cavalcades to celebrate Halloween. Now, we have confirmation that one iconic parade float, which was part of the Festival of Fantasy Parade, will be returning to Main Street, U.S.A. specifically for Disney After Hours Boo Bash — Maleficent!

In case you aren’t familiar, Walt Disney World has been bringing cavalcades to the theme parks throughout the day as they continue to operate amid the ongoing pandemic. These pop-up cavalcades include small floats (at Magic Kingdom they are parade floats while at Animal Kingdom they are riverboats) with some of our favorite Disney pals who Guests can wave to from a safe social distance.

Disney did confirm Halloween cavalcades would be coming for Boo Bash, and now we know exactly who we will see coming down Main Street, U.S.A. — Including Maleficent in her fire-breathing dragon form!

Special cavalcades will pop up throughout the night including “Mickey’s Happy Halloween Cavalcade,” with Mickey Mouse and friends dressed up for the occasion. In the “Disney Villains Halloween Cavalcade,” villains will take to the street and celebrate their favorite time of the year. “Jack’s Nightmare Cavalcade” will feature Jack Skellington, Sally and Oogie Boogie riding down the parade path to “This is Halloween,” and last, but definitely not least (we would never say that about her!), Maleficent will also make an appearance in the form of a fire-breathing dragon.

We are excited to see Disney World bringing Maleficent back to Main Street, U.S.A. for Disney After Hours Boo Bash. For more information regarding Boo Bash, check out our article here.

Maleficent was one of the iconic parade floats from the Festival of Fantasy Parade that would head down Main Street U.S.A. every afternoon at Magic Kingdom. However, due to the ongoing pandemic, Disney World had to put a temporary pause on parades and instead has been bringing Guests pop-up cavalcades.

These pop-up cavalcades include small floats with some of our favorite Disney pals who Guests can wave to from a safe social distance including one cavalcade featuring Mickey and the gang, another featuring the Disney Princesses, and one featuring Winnie the Pooh and friends.

At this time, there is no word as to when the Festival of Fantasy Parade will return but Inside the Magic will keep you updated as we get information.