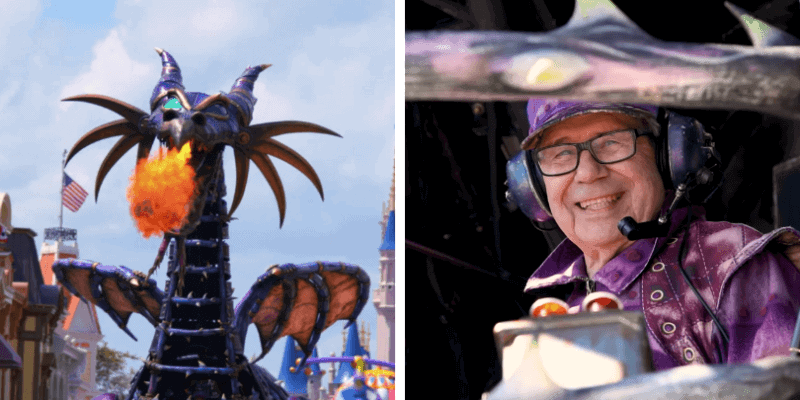 One of the coolest jobs a Walt Disney World Cast Member could have in a parade is being the lucky guy driving the epic steampunk style Maleficent dragon float in the Festival of Fantasy parade. Well, that lucky guy is now Walt Disney World parade float driver, Larry Worbel.

Mr. Worbel has been a Cast Member for 18 years, driving parade floats at Walt Disney World in several different parades. But for at over a year, he had the dream to be at the controls of the now-iconic fire-breathing dragon float. In fact, it was at the top of his bucket list to do so! Now, his dream finally came true. And his whole family came out to see it!

Larry has a deep love for the Disney parades and his job as a float driver. “When I’m driving a float and seeing the crowd, knowing that I’m helping people have a good time, that–to me–is a rush,” he explained. “I hope the crowd enjoys it as much as I do.”

But while he was preparing for his big part, the entire Worbel family was finding their spot along the parade route for “the 3 o’clock parade.” Including, his wife and fellow Walt Disney World cast member, Brenda Worbel.

“I’m excited for him and so nervous,” she said smiling. “He’s got kids from four or five states who have all flown in just for this moment.”

“I wasn’t even paying attention to the rest of the parade,” one of Larry’s family members explained. “I was watching him from all the way at the other end [the entryway to Liberty Square] and watching come around [the central hub].”

“Seeing our dad in his bucket list dream driving the dragon,” one of Larry’s sons said. “We’re just really proud that he’s able to do that!”

After the parade, Larry came out to see his family on Main Street still dressed in his purple dragon uniform. Giddy as a little kid.

“The whole cast of the parade today was just fabulous. I love them. I could hear you [his family]. It was just a magical thing,” he exclaimed jumping up and down.

Walt Disney World Cast Members like Larry spend every day trying to make guests’ dreams come true. It makes our hearts so full to see his own dream finally come true. The next time you see Maleficent roar by, be sure to be extra loud for Larry: the new man behind the dragon.

Book Your Trip to the Magic Kingdom

Do the shots of “Festival of Fantasy” and Main Street U.S.A. have you craving another visit to the Magic Kingdom? Well, our friends at Academy Travel are ready to help you book another awesome Walt Disney World vacation and they have the experience and expertise needed to get you the best possible deal for your budget. Click here to learn more and receive your free, no-obligation quote today.