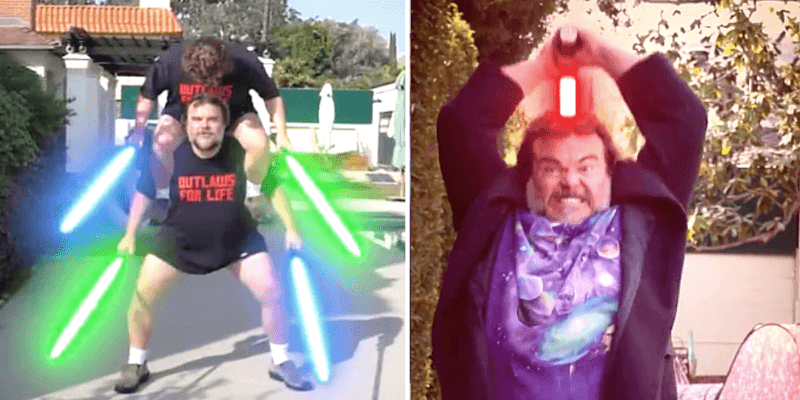 Revenge of the Fifth

In honor of Revenge of the Fifth, Jack Black pulled out the Sith’s trademark red lightsaber to invite Star Wars fans to abandon the Jedi and switch sides. In a new video, Jack Black utilizes a Force choke, a favorite move of Sith Lord, Darth Vader (James Earl Jones) to pull the camera’s POV closer. He then appears to hack the screen in half with a blow from his lightsaber, revealing a seemingly endless loop of the video. Black wrote in an Instagram message accompanying the post, simply,

“Come to the Dark Side”

Star Wars Day, May the 4th

Revenge of the Fifth is the Dark Side version of the popular Star Wars Day celebrated each year on May the 4th. This year, Star Wars icons like Mark Hamill (Luke Skywalker), Billy Dee Williams (Lando Calrissian), Pedro Pascal (The Mandalorian), and Samuel L. Jackson (Mace Windu) took to social media to celebrate May the 4th. Jack Black also participated in the Star Wars Day fun, posting a video of himself parodying the confrontation between Obi-Wan Kenobi (Ewan McGregor) and General Grievous (Matthew Wood) in Star Wars: Revenge of the Sith (2005).  Black wrote,

“May the fourth be with you!!”

Revenge of the Fifth is an obvious take on Episode III’s title Revenge of the Sith, so Jack Black’s homage to the scene works as an homage for both May the 4th and Revenge of the Fifth! As General Grievous, Jack Black pulled double-duty utilizing some really cool effects to enable the comedian to wield 4 lightsabers at once, just like Sith Lord Count Dooku’s partner-in-crime.

Star Wars Celebration on Twitter for Revenge of the Fifth

Star Wars fans took to Twitter to share their favorite Anakin Skywalker memes, Darth Vader memes, and Darth Maul memes to celebrate the Dark Side of the Star Wars franchise. Twitter user obi-wan jabroni joked that Ben Kenobi may be the reason we have two Star Wars Days back-to-back, commenting on the Jedi Master’s failure to keep Anakin Skywalker on the light side of the Force, Tweeting,

Why do we have 2 Star Wars days in a row? #RevengeOfTheFifth pic.twitter.com/Fmj5qP48kl

Hayles joked about the ongoing Gina Carano Mandalorian controversy, including Cara Dunes photo with her other favorite Star Wars villains.

Other Twitter users took the opportunity to praise their favorite Star Wars film, Revenge of the Sith (2005). Star Wars Fan 327 shared still from the film, along with concise message, saying,

“Revenge of the Sith is a masterpiece #RevengeOfTheFifth”

What’s next for Star Wars?

Disney and Lucasfilm have kept the pedal to the metal as they continue to put out high-quality Star Wars content. Following the success of Jon Favreau and Dave Filoni’s The Mandalorian for Disney+, Star Wars fans can’t seem to get enough of their favorite characters, whether they fans of Jedi Knights or lean more towards the Sith Lords. In honor of Star Wars Day, Disney+ released The Bad Batch, an animated series based on characters introduced by Star Wars: The Clone Wars, produced by Dave Filoni. Star Wars: Obi-Wan Kenobi has just commenced filming with stars Ewan McGregor and Hayden Christensen returning to their prequel trilogy roles of Obi-Wan and Darth Vader respectively. Obi-Wan Kenobi is slated to premiere on Disney+ in 2022. The Book of Boba Fett will follow the events of season 2 of The Mandalorian and will bow in December 2021.

What do you think of Jack Black’s videos? How are you celebrating May the 4th and Revenge of the Fifth? Let us know in the comments!