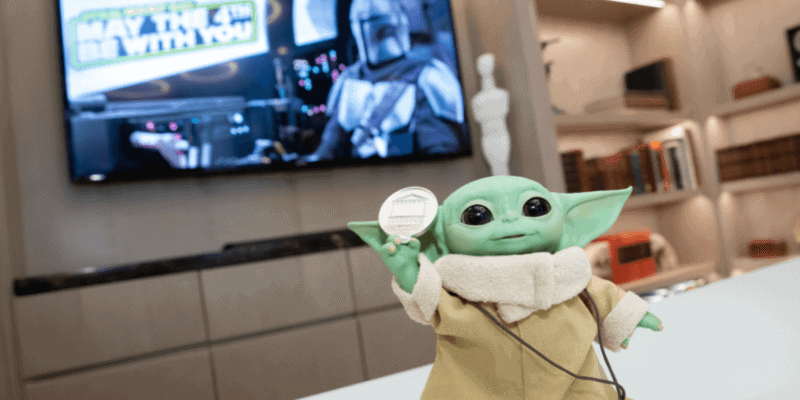 May the Fourth — National Star Wars Day — is upon us, and who better to celebrate the day with than the adorable little green guy himself, Grogu! Grogu — AKA The Child AKA Baby Yoda — flew all the way to New York for the special day and rang the starting bell at the New York Stock Exchange.

The delightful moment with the breakout star of The Mandalorian was shared by the New York Stock Exchange (@NYSE) on Twitter:

No Jedi mind tricks ?✨ Grogu from @TheMandalorian is at the NYSE today to celebrate #StarWarsDay #Maythe4thBeWithYou @WaltDisneyCo @Disney pic.twitter.com/wodwqO2vm9

Disney+ even responded to the Tweet, saying, “This is the way.”

This is the way.

It seems that Baby Yoda had quite a busy day at the Stock Exchange. Not only did he ring the morning bell, but he also made his way next to The Walt Disney Company ticker. He was then able to sign the wall of autographs that other bell ringers sign and finally, he held up a coin from the Stock Exchange in front of a still from his show, The Mandalorian, currently streaming on Disney+.

This is not the first time that Baby Yoda has traveled to greet people and spread his cuteness around. In November 2020, SpaceX launched a rocket for the longest human space flight in history. Grogu joined the astronauts on their trip and helped them manage space travel since he is so used to it.

Grogu has also taken vacations to both the Walt Disney World Resort in Florida and Disneyland in California.

A post shared by A and S’s baby yoda (@baby_yoda_at_disney)

Of course, if you could not make it to the New York Stock Exchange to see Baby Yoda and to celebrate May the Fourth, there are still a ton of ways you can get your Star Wars fix. shopDisney released a ton of amazing merchandise, including spirit jerseys, Darth Vader mouse ears, and a trio of Starbucks mugs that represent three planets in the Star Wars galaxy.

If shopping isn’t your thing, but you still love all things Star Wars, be sure to check out some incredible new experiences coming to both Walt Disney World and Disney Cruise Line. These include an actual Star Wars hotel opening in Disney World next year and an exclusive, adults-only Star Wars bar, the Hyperspace Lounge, that will be aboard Disney’s newest cruise ship, the Disney Wish.

However you choose to celebrate,  happy Star Wars Day, and May the Fourth Be With You!

What was your favorite part of May the Fourth? Let us know in the comments!