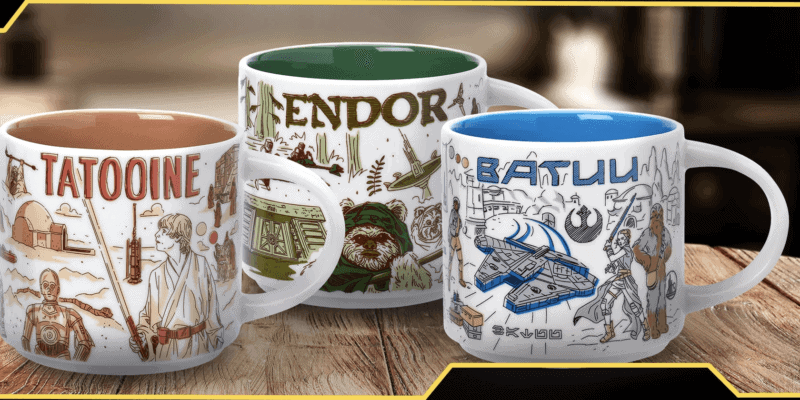 Happy National Star Wars Day everyone! This day is one that Star Wars fans across the globe look forward to, and to celebrate, shopDisney has dropped a TON of new Star Wars merchandise on its website!

From spirit jerseys to plush toys to T-shirts, there is something available for every Star Wars fan to love. And now, fans can grab all-new “Been There” coffee mugs!

You may recall that last year on May 4, Disney released a trio of mugs for what was called the “Been There” collection. The original mug release collection featured the Star Wars planets of Bespin, Hoth, and Dagobah and was created by Starbucks.

This year, Star Wars fans can add three new mugs to their “Been There” collection. Guests who visit shopDisney will be able to purchase coffee mugs that feature the planets Endor, Tatooine, and Batuu.

These three planets are located in what is called the Outer Rim of the Star Wars galaxy.

Endor, also known as the Forest Moon of Endor was featured heavily in The Return of the Jedi. It is a forest planet that is home to the cute but not-to-be-played-with Ewoks, who are featured front and center on the mug.

The second mug in the collection is a mug that represents the desert planet of Tatooine. Star Wars fans will know that Tatooine is the planet that Luke Skywalker grew up on. If you didn’t know that before, you will now, as Luke is the main feature of the new mug. C-3PO and Tusken Raiders — also known as Sand People — are also featured on the mug.

The final mug released in the new collection celebrates the planet of Batuu. What makes this mug different from the other mugs is that Batuu is not a planet that is featured in the Star Wars films. Batuu was created for Star Wars: Galaxy’s Edge and is the planet that Guests visit when they travel to the Walt Disney World Resort in Florida or Disneyland in California.

The planet of Batuu is home to the large trading post, Black Spire Outpost. The planet became a home for smugglers by the time the war broke out between the Rebel Alliance and the First Order. It is on this planet where you can find rebels such as Rey and Chewbacca, but be careful, Kylo Ren is known to make an appearance in his search for rebel spies.

While the Star Wars mugs are currently available on the shopDisney website, make sure to get yours quickly before they sell out! Each mug sells for $19.99.

Which of these mugs are you excited to add to your Star Wars collection? Let us know in the comments!

Comments Off on New “Been There” ‘Star Wars’ Mugs Drop on shopDisney!