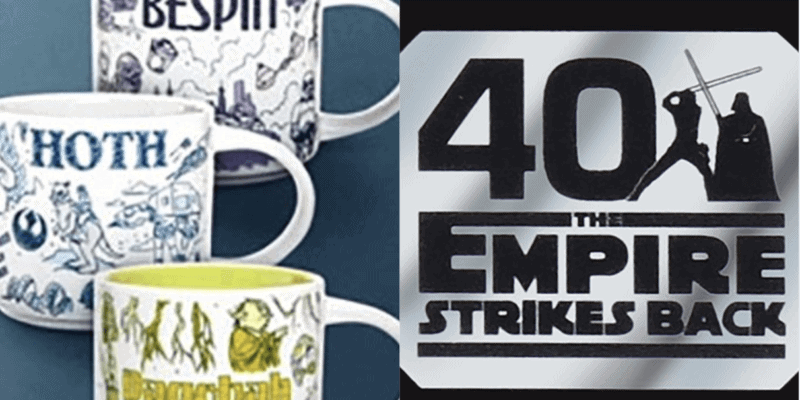 You may recall the Star Wars Hoth “Been There” mug that had the online rumor mill swirling in February. Now, it’s existence has been confirmed by the Starbucks team, and, in even more exciting news, there are two other Star Wars “Been There” mugs in the series as well!

The shopDisney team has confirmed that the coffee mug collection will be available at 7:oo PST online at shopDisney.com.

The three planets featured in this Disney mug collection are Hoth, Bespin, and Dagobah. All three feature heavily in Star Wars: The Empire Strikes Back. Each mug has icons that are specific to that planet in the Star Wars galaxy, such as a rebel insignia on the Hoth design and Yoda on the Dagobah mug.

Hoth is an ice planet where few species, like tauntauns, are able to survive. In ESB, Han Solo’s place in the core trio is cemented when he rides a tauntaun into a storm to rescue Luke Skywalker.

Dagobah is the swamp planet where Master Yoda exiles himself following the destruction of the Jedi Order. In The Empire Strikes Back, Luke tracks Yoda to the boggy planet with R2-D2 in tow.

40 Years of The Empire Strikes Back

The Disney x Star Wars mugs were originally rumored to be available exclusively at Disney Parks in May 2020, but the temporary park closure has dictated that they will now be released on the web instead. They are officially part of “The Empire Strikes Back 40th Anniversary Collection.”

In addition to the “Been There” Starbucks mug series, his new Disney merchandise collection has numerous pieces dropping on Star Wars Day. A spirit jersey and multiple figurines featuring characters from Star Wars: Episode V – The Empire Strikes Back will also be available to order.

Which of these Starbucks x Star Wars Been There mugs do you want most? Let us know in the comments!