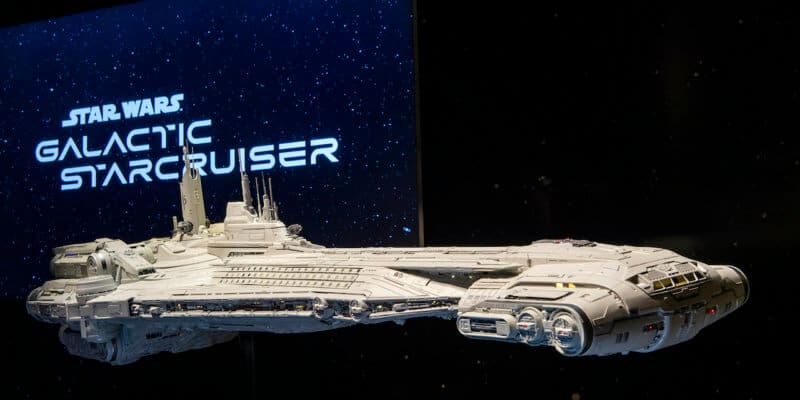 It is May 4, which means it is Star Wars Day, and Disney World has chosen to celebrate in a big way!

First of all, let us say May the fourth be with you. Now that that’s out of the way, we are going to take an in-depth look at the all-new Star Wars: Galactic Starcruiser!

The new two-night immersive Star Wars experience will allow Guests to hop aboard the Halcyon starcruiser and step into their very own Star Wars movie, where a storyline is progressing, and everyone around you is in character. This one-of-a-kind and unique experience is not something that has ever been done before by Disney, so many Star Wars fans have been on the edge of their seat, awaiting the news about this hotel.

Originally slated to blast off in 2021, we just received confirmation that it will go to a galaxy far far away in 2022. We have already seen many renderings of what the interior of the ship will look like, but what about the outside of the ship? Of course, the hotel itself, as we have seen, is shaped much more like a typical square building, Walt Disney World President Jeff Vahle (@jeffvahle) just took to Instagram to let Disney World Guests know they will get a much closer look of the ship at Disney’s Hollywood Studios, and will be able to see for themselves what the Halcyon starcruiser looks like.

Overnight, our fantastic Disney Imagineers installed a model of the Halcyon starcruiser, debuting today for a limited time at Walt Disney Presents in Disney’s Hollywood Studios. In the storyline of Star Wars: Galactic Starcruiser, Guests enter a Launch Pod, jump to hyperspace, and board the Halcyon for their two-night, all-immersive adventure. Check out the Disney Parks Blog for more on this ship and Star Wars: Galactic Starcruiser, which will welcome its first travelers in 2022.

Below is another full shot look at the ship Guests will soon get to board!

Now that we have seen the new lightsaber come to life as well, it seems that this experience will bring the Star Wars franchise to life! And remember, the Galactic Starcruiser will be an extension of Star Wars: Galaxy’s Edge, and much like a cruise ship, Guests will have a day where the Halycon ports in Batuu, and they get to explore!

As per Disney Parks Blog,

Disney has always done a fantastic job allowing Guests to step into a magical world, and it seems that they are about to unlock a whole new world of detail with this hotel experience. Now, we just need to start saving to make sure we can ride in 2022!

Do you plan on riding the Star Wars: Galactic Starcruiser?

Want to plan a trip to Walt Disney World to experience Star Wars Galaxy’s Edge? We can help, click here for more information.