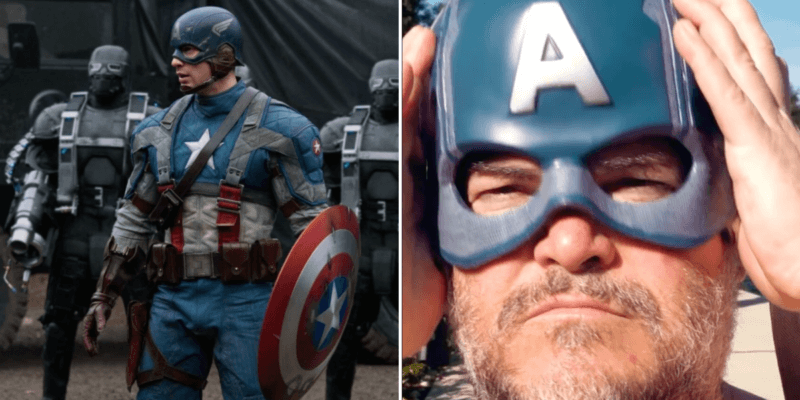 The Falcon and the Winter Soldier may have only just wrapped, but there is a new Captain America on the scene. And no, we don’t mean Anthony Mackie.

The new Disney+ television show soared to popularity six weeks ago when the Anthony Mackie and Sebastian Stan-led action thriller debuted on Disney’s streaming service, Disney+. Despite a polarizing season finale — that led to Marvel’s first ever “Rotten” rating on the critic review site, Rotten Tomatoes — the latest addition to the Marvel Cinematic Universe’s Phase 4 roster became a hit with Marvel fans.

Even though there seems to be an abundance of new Captain Americas on the scene, it seems someone else is wanting the role. He may be even gunning for a starring role in the recently announced Captain America 4 — the fourth installment in the Captain America franchise will reunite Malcolm Spellman with The Falcon and the Winter Soldier staff writer, Dalan Musson, bringing the beloved Jack Kirby comic book character back to the big screen. No other details have yet been announced, although it wouldn’t be surprising to see Sharon Carter (Emily VanCamp) and Helmut Zemo (Daniel Brühl) return after that riveting finale.

Move over, John Walker. That new actor who wants to throw his name into the star spangled ring and become the next Avenger? Jack Black.

The adored actor — and Tenacious D star — who has starred in multiple blockbuster movies including School of Rock (2003), Jumanji (2017), Goosebumps (2015) and Shallow Hal (2001) has taken to his Instagram page in what looks like a Captain America meets COVID-19 vaccine parody.

The video Black shared to his almost eight million followers shows the singer/actor being injected with a vaccine before growing bigger and turning into the famous Marvel comics character. Black goes on to show his strength, wielding Captain America’s shield and knocking over tall towers of bricks. The King Kong (2005) actor then showed his worthiness by catching Thor’s prolific hammer, Mjolnir, and causing thunder to rain down from the sky and explode in his swimming pool.

Even though the caption for Black’s video is an emoji of the United States of America, the tone of the parody seems to imply that the COVID-19 vaccine will make you stronger. The setting at the very start of the video looks to be clearly a hospital setting and not the underground military base environment where Steve Rogers was injected with the super serum to become Captain America.

Jack Black — who is married to artist, Tanya Haden — has yet to star in Kevin Feige’s MCU, but this video — along with all its thrilling special effects — could be his audition to enter the film franchise (not officially, of course).

What’s next for the MCU?

Tom Hiddleston will return as Loki in his self-titled Disney+ show, before Black Widow (2021) will finally debut on the streaming service and in theaters simultaneously, after over a year of reshuffles. Phase 4 is well underway — and with news of the new Captain America 4 movie announced — it would seem that big plans are in motion for Phase 5. And, those big plans could include Jack Black finally joining the MCU.

It is, however, important to remember that Marvel Studios has not confirmed anything about Jack Black officially joining the MCU.

Do you think Jack Black would make the perfect Captain America?