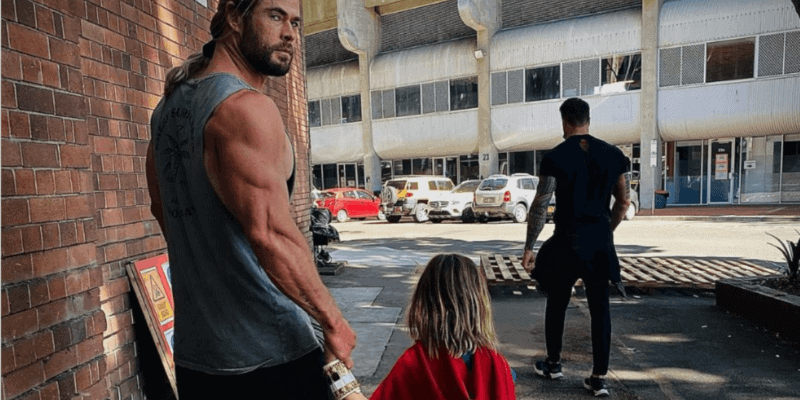 Chris Hemsworth is taking a break from the set of Thor: Love and Thunder (February 11, 2022) to spend some time with his family. And his son took the opportunity to tease Hemsworth that Thor is not his favorite superhero.

Chris Hemsworth has been playing Thor since Thor (2011) and the character has had some low and high moments throughout the Marvel Cinematic Universe — those low moments include the entirety of Thor the Dark World (2013). But since the success of Thor: Ragnarok (2019), Marvel fans have taken to Hemsworth’s Thor, who believes he is the strongest avenger.

Holding my little man’s hand and asking him the age old question. “What do you want to be when you grow up”
“Dad i wanna be Superman” Lucky I have two other kids

It just shows that it does not matter if you help to save half the universe — your kids will still not think that you are cool. Even Deadpool’s star Ryan Reynolds got in on the teasing action commenting with a laughing emoji flanked by hearts. Hemsworth’s Avengers: Endgame co-star Josh Brolin/ Thanos commented with, “Hahahaha,” and DC’s Wonder Woman (Gal Gadot) liked the post as well.

But lucky for Chris Hemsworth and his son, fan artist Apex_Form has a solution. He imagined the Thor Odinson Australian actor as Superman/Clark Kent:

While Hemsworth looks dashing as the Man of Steel, Marvel fans are certainly not willing to let him go. There are so few of the original Avengers left standing. Black Widow/Natasha Romanoff (Scarlett Johanson) may be getting her own film this July, but after Black Widow finally hits theaters, so it may be the last we ever get to see of her.

Captain America/ Steve Rogers (Chris Evans) may not have died on-screen like Iron Man/Tony Stark (Robert Downey, Jr.) but it is doubtful — though not impossible — fans will ever get to see them again. It raised the question from the Eternals trailer of who should even lead the Avengers now. Jeremy Renner’s Hawkeye/Clint Barton is off on his own Disney+ original series, and who knows where the new Professor Hulk/Bruce Banner (Mark Ruffalo) is at the moment.

Funny Instagram post aside, Hemsworth is set to return as the God of Thunder in Love and Thunder. The fourth Thor film and Hemsworth’s eighth appearance as the Prince of Asgard will reunite him with Jane Foster (Natalie Portman) as the new Thor, Lady Thor, after she is able to lift Thor’s hammer.

Tessa Thompson’s Valkyrie is now the Queen of Asgard and is expected to be looking for a queen to rule beside her. And she was recently spotted cuddling up with singer Rita Ora and Director Taika Waititi on the set of the Thor sequel.

Joining the Asgardians is much of the cast of the Guardians of the Galaxy (2014) and Christian Bale as Gorr the God Butcher and Russell Crowe as Zeus. Though notably absent is Tom Hiddleston as Loki, who will be causing his own chaos in his upcoming series.

Perhaps Hemsworth could jump over to DC after Henry Cavill gets snatched up by Marvel Studios to play Wolverine.

Or in the spirit of the new What If…? series, maybe one day the two competing studios will come together like their comic book predecessors and create a live-action version of Amalgam Comics which had fun combinations of DC and Marvel Characters like Super Soldier (Superman meets Captain America) and Dark Claw (Batman meets Wolverine).

Let us know in the comments below if you think Superman is better than Thor or if Chris Hemsworth should just try again with his twin sons.