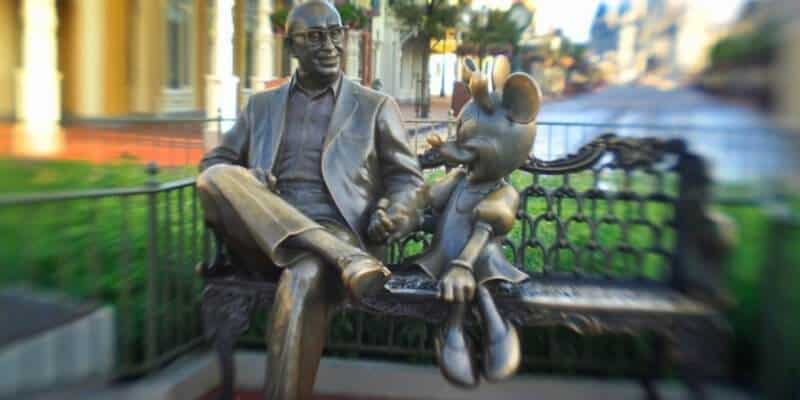 Roy and Minnie’s statue is one of the first elements Guests see when they step foot inside Magic Kingdom — Even before Cinderella Castle!

This statue represents Walt’s brother, Roy Disney, and the one and only, Minnie Mouse. Further down Main Street, U.S.A. Guests will come in close contact with another statue — The Partners Statue, featuring Walt Disney himself holding onto Mickey Mouse’s hands.

Both of these statues, together, mean so much to Walt Disney World and continue Walt’s legacy each and every day.

Related: Walt Disney Is Actually Talking to Mickey In the Partners Statue

So, what is the story behind the Roy and Minnie statue? Well, one Disney Imagineer spilled the beans and shared some amazing details surrounding the design elements that are sure to touch your heart!

Gary Landrum of Walt Disney Imagineering took Travel + Leisure on a tour of Magic Kingdom, giving the inside scoop on some incredible stories, design elements, and more!

To start the tour, Landrum visited the iconic Roy and Minnie statue, which was designed by Disney Legend Blaine Gibson:

“At Disney, we’re known for storytelling. All of our parks have themes that guide the stories that are told within them. Here at the Magic Kingdom, the theme is Magic Made Real. It’s the ability to step into the fantasy worlds which we had already created on film and television.

And our story in the Magic Kingdom begins right here in Town Square. And in the center of the park is where the park was dedicated by one of our founding fathers, Roy Disney — Walt Disney’s brother.

Roy is interpreted life-size by Disney Legend Blaine Gibson and he’s sitting on the bench with Minnie Mouse scootched right up next to him like the favorite Uncle that he really is.”

Landrum continued to tell a fun story behind why Blaine designed the statue to have Minnie’s hand cupped on top of Roy’s. Not everyone knows this, but this element was important to tell the story of Roy and Walt’s relationship — Roy was always supporting Walt and by having Roy hold Minnie’s hand in this statue, it portrays Roy continuing to support his brother and carry on his legacy:

Earlier in my career, I had the great pleasure to spend time with Blaine and he told me a charming little story. If you’ll notice, Roy has his hand out and Minnie’s hand is cupped up on top of it. By supporting Minnie, he’s really supporting his brother, Walt, which he did his entire life.

Roy insisted upon having Mickey Mouse stand by his side during the dedication. He felt that that was the closest thing to having his brother Walt by his side.”

You can watch the full video from Travel + Leisure here:

The iconic park bench occupied by co-founding father Roy O. Disney seated next to Minnie Mouse greets millions of guests each year and is one of the most prized photo locations ever. Although it was originally placed inside the fence in Town Square at Magic Kingdom Park, guests routinely climbed over it to sit next to Minnie. Within a year, it was relocated just outside the fence. Guests may feel that the empty space to the right of Minnie was made for them, but Blaine’s intent was to show Minnie’s conscious decision to sit right next to Roy as a way to make him more “approachable,” as he was rarely in the limelight as was Walt.

Blaine also purposefully had Roy support Minnie’s hand from underneath, a creative acknowledgment of how Roy supported his brother in their new business venture. Amazing…I hope the next few photos reveal a bit of the magic that Blaine so masterfully created from the heart.

We love the fact that the Roy and Minnie statue was designed to show Roy’s support of his brother, Walt. Now every time we see the statue in person, we will instantly think of this incredible story and design detail.

Another Disney Statue Coming In The Future

Related: Inside Look at Walt and Lillian Disney’s Former Home

The soon-to-be Walt Disney statue is going to be in the Dreamer’s Point area of the theme park and, though we do not have an exact timeline for when we will see this statue, we can only hope it will debut in time for Walt Disney World’s 50th anniversary!

If you want to see the Roy and Minnie statue in person or want to see the Walt Disney statue when it debuts, but need help planning your magical vacation, be sure to get in touch with our friends at Academy Travel. They will help you plan out every aspect of your Disney World trip including booking your Resort hotel, Park Pass reservations, dining reservations, and more! Get your free quote today.

Did you know this about the Roy and Minnie statue? Let us know in the comments below.